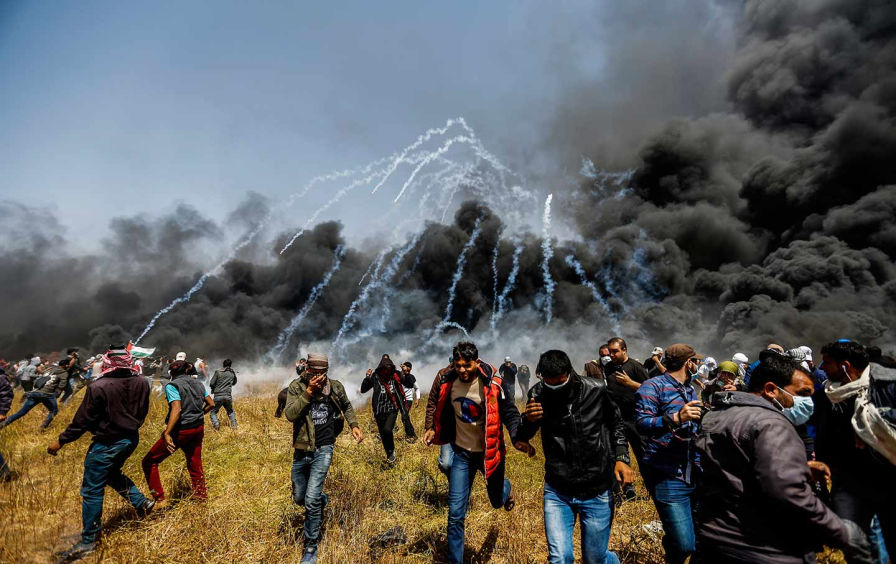 "It is long past time to end the blockade of Gaza—and to reckon with the one-state reality in which Palestinians and Israelis live.By Ian S. Lustick

The barrier enclosing the two million Palestinians “living” in the Gaza Strip is not a border between two countries, as the media have insistently called it. It is a wall erected by Israel to make the suffering of those living inside the Gaza ghetto as invisible as possible to those living outside it.

Israel has told Gazans that anyone attempting to breach this wall and escape from Gaza will be shot. Anyone approaching it will be shot. And that is precisely what has happened over the weeks of protests by Palestinian refugees seeking to highlight their seventy-year exile from land they can see just beyond the wall. Scores of Palestinians have been killed, including journalists and children. Thousands more have been injured by live fire, with many losing legs and arms to amputations. Alongside this, there has been a report of one Israeli soldier hurt by a stone.

There are many words for what this is. Palestinians speak of heroism, resistance, dedication, and martyrdom. The Israeli government calls the shoot-to-kill and shoot-to-injure policies “self-defense.” Individual soldiers call it “following orders.” Israeli human rights groups, meanwhile, call the policy ordered by Prime Minister Netanyahu and Defense Minister Avigdor Lieberman “grossly illegal.” My grandmother would have called it a shanda (Yiddish for a “disgrace”). But whether it is heroism or self-defense; whether the orders to shoot are legal or illegal; the mounting Israeli gun violence the world has been forced to witness along the Gaza ghetto wall is, without a doubt, disgusting. For any human being, no matter what their political views or ties to Israel or to Palestinian Arabs, the continuous mass shooting of Palestinian civilians is, or should be, emotionally and spiritually intolerable.

That it is psychologically and politically possible for Palestinians to continue sacrificing themselves in this way testifies to the desperation of their circumstances; that it is psychologically and politically possible for Israelis to murder and maim so many men, women, and children trying to escape from the ghetto within which they have been concentrated, or just trying to attract the world’s attention to their suffering, is a tragic and humiliating stain on the Jewish state and the Zionist movement that created it. It is also an entirely self-defeating for a state struggling against efforts to “delegitimize” its existence.

To be sure, there is always Israeli hasbara, or propaganda, to help those seeking some way to suppress the revulsion and pain that any decent person must feel at the stories coming out of Gaza. This hasbara insists that the protests are nothing more than a cynical Hamas publicity stunt. It tells us that armed Hamas terrorists are hiding themselves among the demonstrators, using the miserable masses to conceal their efforts to kill Israelis. Who could doubt this? When the British ruled Palestine, the underground Jewish army prided itself on hiding arms factories in grammar schools and synagogues. And as we know, in any besieged ghetto there will be ghetto fighters, and they will be treated as heroes by those on the inside, and terrorists by those on the outside. But if there are certainly men of violence among the masses of protestors, let us not forget that alongside the many Israeli soldiers who surely suffer some pangs of conscience, there are some, as we have seen on videotape, who high-five one another for using fancy sniper rifles to put big holes in human bodies hundreds of yards away.

As for those in charge of the security policies of the current Israeli government, they know all too well what they are doing, what horror they are inflicting. The security hawks that staff leading think tanks and Israeli government ministries regularly speak of the need to “mow the lawn” in Gaza, to keep the population there on a “strict diet,” and to “manage the conflict” by using purposefully inflicted suffering to sear into Palestinian hearts the belief that resistance is futile. When Israel adopted its policy of enforcing a hermetic seal around Gaza in 2007, a political geographer at Haifa University named Arnon Soffer offered his full-throated endorsement, but added that it would eventually mean, not shooting armed men, but “putting a bullet in the head of anyone who tries to climb over the security barrier.” “If we want to remain alive,” he said, by which he meant if Israel wants to remain a “Jewish” state, “we will have to kill and kill and kill.”

The struggle for a two-state solution is not moribund; it is dead. This is true even if the pretense that negotiations could succeed remains a useful excuse—a way for Israel, the Palestinian Authority, the United States, and the peace-process industry to exploit or ignore the deepening oppression of the current one-state reality. As documented by the Israeli military, there are now more Palestinians under the control of the Israeli state than there are Jews. Indeed, for all intents and purposes the Palestinians of Gaza and of the West Bank, citizens of no other country, are already within the Jewish state. They are citizens of no other recognized state. As measured by how much impact the State of Israel has over the intimate details of their lives, and indeed over whether they will live at all, they are as much inhabitants of the State of Israel as black slaves were inhabitants of the United States or as Africans in the Bantustans were inhabitants of apartheid South Africa. The five-decade occupation of the West Bank and the dozen-year blockade of Gaza, combined with regularly inflicted violent punishment, just mark differences in the way the Israeli state governs different populations in different regions."