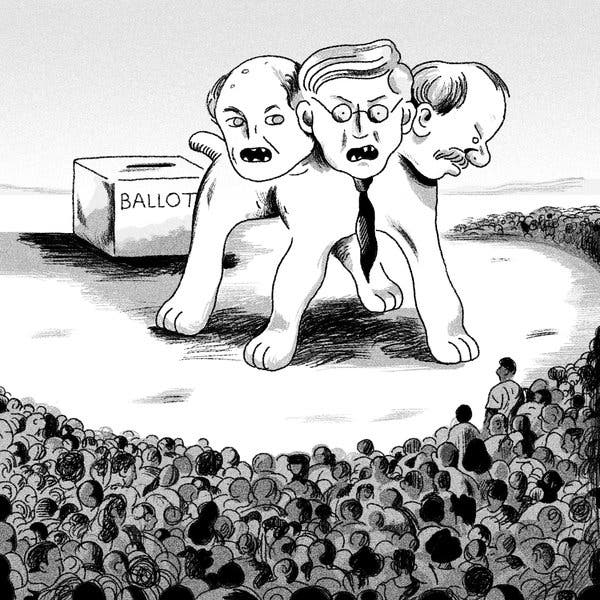 "This is part of a series on voting in America, which will run up to Election Day in November. For Part 1, on the importance of voting, go here. And for Part 2, on a court case over a Kansas voter registration law, go here.

In the last speech of his life, on April 3, 1968, in Memphis, the Rev. Dr. Martin Luther King Jr. laid out the case for the dignity and equality of African-Americans as simply as he could. “We aren’t engaged in any negative protest and in any negative arguments with anybody. We are saying that we are determined to be men. We are determined to be people,” he said. “All we say to America is, ‘Be true to what you said on paper.’”

The moral clarity of that appeal is bracing, and so is the difficulty of achieving it — a fact that is evident nowhere as much as in the fight for voting rights. As Dr. King knew well, the history of voting in the United States was, and is, in large part the history of white people in power devising endless ways to keep black people from casting a ballot.

It’s been true all along, from the complete disenfranchisement of slavery to the effective silencing of the Jim Crow era up to now, when a welter of clever and at times subtle laws operates to make it harder for minorities to get to the polls, and to have an equal voice — or any voice at all — in the choice of our representatives and policies.

This is always a serious matter, but especially now, as the midterm elections approach with control of Congress at stake. As recent elections in Virginia and Alabama have shown, minority voters can make all the difference.

Dr. King understood this half a century ago, which is why he considered the right to vote the centerpiece of the civil rights movement. “Voting is the foundation stone for political action,” he wrote in an essay titled “Civil Right No. 1,” which ran in The New York Times Magazine in March 1965, days after the march and bloodshed in Selma and months before the Voting Rights Act would become law.

The right to vote wasn’t just “the most fundamental of all privileges of democracy,” Dr. King wrote; it would, if truly enjoyed by black Americans, transform the entire country. “Our vote would place in Congress true representatives of the people who would legislate for the Medicare, housing, schools and jobs required by all men of any color.”

The Voting Rights Act of 1965 is arguably the most popular and effective civil rights law in the nation’s history. Soon after it passed, black registration and turnout skyrocketed. In Mississippi, 7 percent of eligible black voters were registered in 1965; two years later, 60 percent were. Still, the law shouldn’t have been necessary. The constitutional amendments it codified had been passed more than a century earlier but then were systematically undermined by a racist regime determined to protect white power. And even though Congress has reauthorized the law four times — the last time, in 2006, the Senate approved it 98 to 0 — it still requires frequent care and tending by the federal courts, especially the Supreme Court.

Unfortunately, the court’s conservative majority has severely weakened the protections the law was intended to provide. The biggest blow came in a 2013 decision, Shelby County v. Holder. In that case, the five conservative justices, led by Chief Justice John Roberts Jr., gutted the heart of the act, which identified several states with long histories of voting discrimination, most in the South, and required them to get federal permission before changing their voting laws. While that remedy may have been a necessary response to 1960s-era racism, the chief justice wrote, “things have changed dramatically.”

In one sense, he was right: Racial discrimination in voting is no longer as blatant or systemic as it was in 1965. But the idea that the American fixation on race and power had magically evaporated in just a few decades was, at best, strikingly naïve. It was also disproved within hours of the court’s ruling, when Republican lawmakers in Texas and North Carolina, both states that had been covered by the Voting Rights Act, rammed through discriminatory new voting laws that they had been gunning to pass for years, including some that had been blocked under the act.

If this wasn’t enough evidence that things have not, in fact, changed dramatically, the point was driven home by the election of Donald Trump in 2016, and the resurgence of overt racism and white nationalism that has followed, with no meaningful pushback from the president.

In the years before Mr. Trump’s election and in the time since, Republican lawmakers around the country aggressively pushed through laws to make voting harder for certain groups, particularly minorities. Poll taxes and literacy tests have given way to voter-ID laws, cutbacks to early voting and same-day registration, polling place closings, voter-roll purges, racially discriminatory redistricting and felon disenfranchisement laws — most of which, though justified on race-neutral grounds, harm minority voters more.

They can also depress turnout, when voters who are not in fact blocked from voting become discouraged by a state apparatus that exudes hostility toward their attempts to exercise their fundamental right.

Are these laws, passed almost invariably by Republican lawmakers, intentionally racist? Or are they merely taking partisan advantage of the fact that black people today vote overwhelmingly for Democrats? It shouldn’t matter. Either way, black voters are targeted, their right to vote hampered.

In the past couple of years, lower federal courts — notably in Texas, Wisconsin and North Carolina, home to some of the worst voting laws in the country — have begun to recognize this. They have become more skeptical of lawmakers’ rationales for passing voting restrictions and have zeroed in on the real impact of such laws on minorities and other vulnerable groups. In striking down a remarkably harsh North Carolina law in 2016, the United States Court of Appeals for the Fourth Circuit found that lawmakers had targeted black voters “with almost surgical precision.”

This is an important step toward a robust judicial defense of voting rights. Now Congress must repair the damage the Supreme Court inflicted on the Voting Rights Act. The most important fix is to restore and strengthen the federal government’s oversight of states and localities that continue to discriminate in voting. This would stop bad laws before they could take effect. It would also eliminate the years of delays that are part of most election-related litigation.

Fifty years after his death, Dr. King’s message is as urgent as it ever was: Justice delayed is justice denied. That may be the most insidious legacy of the court’s Shelby County decision. Lawmakers get free rein to discriminate, while citizens must file private lawsuits and then wait, often years, while elections keep being held, representatives keep getting elected and policies keep getting made.

The Supreme Court has two options. It can follow the lead of the lower federal courts and be more honest about discriminatory voting laws, or it can stick with the willful blindness of its 2013 ruling and let discrimination flourish.

To make the right choice, the justices need only look to someone like Representative John Lewis, the 16-term Georgia congressman who was nearly beaten to death while marching in Selma. Or they can look to Dr. King himself, who would have turned 89 in January. America was legally an apartheid state in living memory. That fact should serve as a corrective to the dangerous notion that “things have changed” enough in the short time since to let our guard down."

Opinion | What the Supreme Court Doesn’t Get About Racism - The New York Times
Posted by John H Armwood II at 8:47 AM