Opinion | We Don’t Need No Education - The New York Times 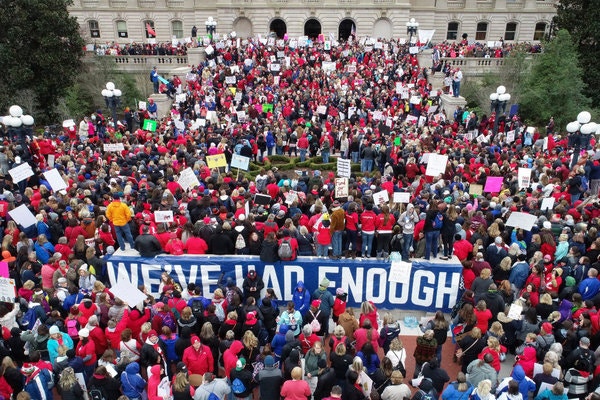 "So what happens when hard-line conservatives take over a state, as they did in much of the country after the 2010 Tea Party wave? They almost invariably push through big tax cuts. Usually these tax cuts are sold with the promise that lower taxes will provide a huge boost to the state economy.

This promise is, however, never — and I mean never — fulfilled; the right’s continuing belief in the magical payoff from tax cuts represents the triumph of ideology over overwhelming negative evidence.

What tax cuts do, instead, is sharply reduce revenue, wreaking havoc with state finances. For a great majority of states are required by law to balance their budgets. This means that when tax receipts plunge, the conservatives running many states can’t do what Trump and his allies in Congress are doing at the federal level — simply let the budget deficit balloon. Instead, they have to cut spending.

And given the centrality of education to state and local budgets, that puts schoolteachers in the cross hairs.

How, after all, can governments save money on education? They can reduce the number of teachers, but that means larger class sizes, which will outrage parents. They can and have cut programs for students with special needs, but cruelty aside, that can only save a bit of money at the margin. The same is true of cost-saving measures like neglecting school maintenance and scrimping on school supplies to the point that many teachers end up supplementing inadequate school budgets out of their own pockets."

Opinion | We Don’t Need No Education - The New York Times
Posted by John H Armwood II at 10:52 AM