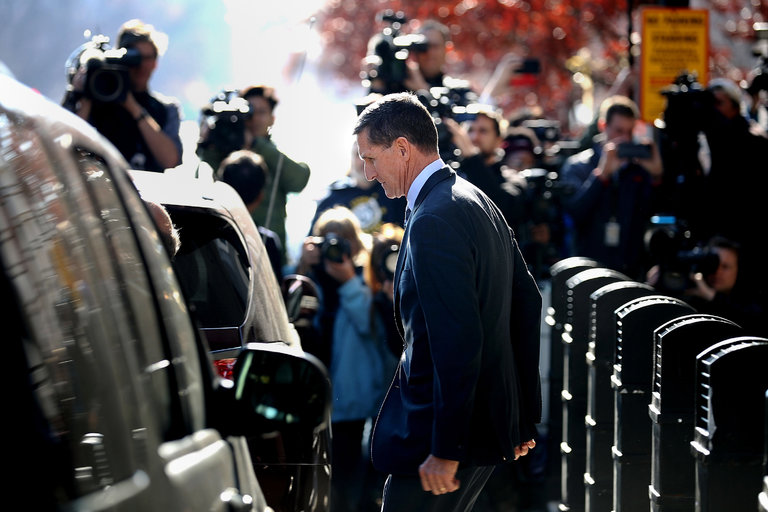 "WASHINGTON — A lawyer for President Trump broached the idea of Mr. Trump’s pardoning two of his former top advisers, Michael T. Flynn and Paul Manafort, with their lawyers last year, according to three people with knowledge of the discussions.

The discussions came as the special counsel was building cases against both men, and they raise questions about whether the lawyer, John Dowd, who resigned last week, was offering pardons to influence their decisions about whether to plead guilty and cooperate in the investigation.

The talks suggest that Mr. Trump’s lawyers were concerned about what Mr. Flynn and Mr. Manafort might reveal were they to cut a deal with the special counsel, Robert S. Mueller III, in exchange for leniency. Mr. Mueller’s team could investigate the prospect that Mr. Dowd made pardon offers to thwart the inquiry, although legal experts are divided about whether such offers might constitute obstruction of justice.

Mr. Dowd’s conversation with Mr. Flynn’s lawyer, Robert K. Kelner, occurred sometime after Mr. Dowd took over last summer as the president’s personal lawyer, at a time when a grand jury was hearing evidence against Mr. Flynn on a range of potential crimes. Mr. Flynn, who served as Mr. Trump’s first national security adviser, agreed in late November to cooperate with the special counsel’s investigation. He pleaded guilty in December to lying to the F.B.I. about his conversations with the Russian ambassador and received favorable sentencing terms.

Mr. Dowd has said privately that he did not know why Mr. Flynn had accepted a plea, according to one of the people. He said he had told Mr. Kelner that the president had long believed that the case against Mr. Flynn was flimsy and was prepared to pardon him, the person said.

The pardon discussion with Mr. Manafort’s attorney, Reginald J. Brown, came before his client was indicted in October on charges of money laundering and other financial crimes. Mr. Manafort, the former chairman of Mr. Trump’s presidential campaign, has pleaded not guilty and has told others he is not interested in a pardon because he believes he has done nothing wrong and the government overstepped its authority. Mr. Brown is no longer his lawyer.

It is unclear whether Mr. Dowd discussed the pardons with Mr. Trump before bringing them up with the other lawyers.

Mr. Dowd, who was hired last year to defend the president during the Mueller inquiry, took the lead in dealing directly with Mr. Flynn’s and Mr. Manafort’s lawyers, according to two people familiar with how the legal team operated.

He denied on Wednesday that he discussed pardons with lawyers for the president’s former advisers.

Contacted repeatedly over several weeks, the president’s lawyers representing him in the special counsel’s investigation maintained that they knew of no discussions of possible pardons.

“Never during the course of my representation of the president have I had any discussions of pardons of any individual involved in this inquiry,” Jay Sekulow, a lawyer for Mr. Trump, said on Wednesday.

Ty Cobb, the White House lawyer dealing with the investigation, added, “I have only been asked about pardons by the press and have routinely responded on the record that no pardons are under discussion or under consideration at the White House.”

During interviews with Mr. Mueller’s investigators in recent months, current and former administration officials have recounted conversations they had with the president about potential pardons for former aides under investigation by the special counsel, according to two people briefed on the interviews.

In one meeting with lawyers from the White House Counsel’s Office last year, Mr. Trump asked about the extent of his pardon power, according to a person briefed on the conversation. The lawyers explained that the president’s powers were broad, the person said. And in other meetings with senior advisers, the president raised the prospect of pardoning Mr. Flynn, according to two people present.

Legal experts are divided about whether a pardon offer, even if given in exchange for continued loyalty, can be considered obstruction of justice. Presidents have constitutional authority to pardon people who face or were convicted of federal charges.

But even if a pardon were ultimately aimed at hindering an investigation, it might still pass legal muster, said Jack Goldsmith, a former assistant attorney general in the George W. Bush administration and a professor at Harvard Law School.

“There are few powers in the Constitution as absolute as the pardon power — it is exclusively the president’s and cannot be burdened by the courts or the legislature,” he said. “It would be very difficult to look at the president’s motives in issuing a pardon to make an obstruction case.”

The remedy for such interference would more likely be found in elections or impeachment than in prosecuting the president, Mr. Goldsmith added.

But pardon power is not unlimited, said Samuel W. Buell, a professor of law at Duke University..."