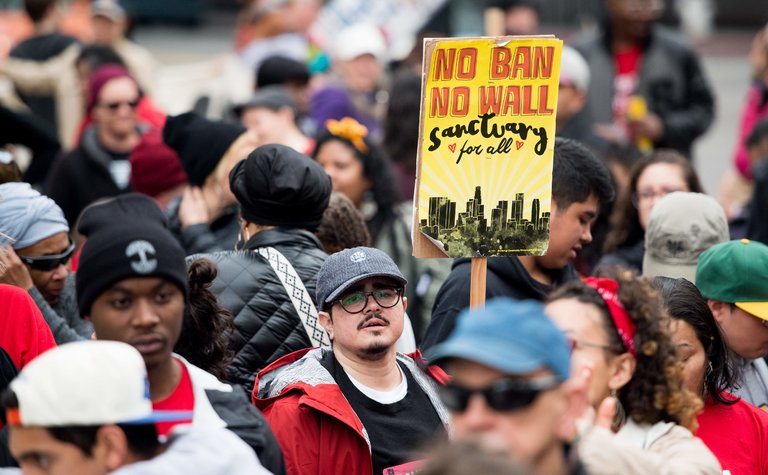 "President Trump has been saber-rattling against “sanctuary” jurisdictions since the early days of his campaign. He and Attorney General Jeff Sessions have frequently threatened to withhold federal funding and even to jail local officials who refuse to help deport immigrants. But until recently, their talk was mostly just that: talk.

This week, however, the Justice Department filed suit against California, challenging three state laws that make up the heart of its sanctuary policies.

This framing has been so effective that the news media has been repeating the analogy without significant scrutiny. The comparison between the two lawsuits, however, is as flawed as it is simple.

To understand why, one needs to understand exactly what sanctuary laws do. They draw their name from the sanctuary movement of the 1980s. During that period, Central American refugees were routinely denied asylum because the United States government supported the regimes from which they had fled. In the face of this injustice, some religious leaders took steps to actively prevent federal immigration officers from arresting and deporting these vulnerable immigrants. It was, at times, a form of civil disobedience.

Today’s sanctuary laws, while bearing the same name, are markedly different. California and the hundreds of other places across the country with such laws and policies have done nothing whatsoever to actively interfere with federal immigration enforcement efforts. Rather, the defining characteristic of these laws is their passivity. They do not direct state officers to take any steps to interfere with federal enforcement efforts. Instead, they dictate that the local police and state officers simply do not assist in the federal government’s deportation agenda — that they do nothing.

This may sound like an overly formal distinction, since both efforts have made it harder for the federal government to deport people. To be sure, the decision of local and state officials not to lend their resources to immigration enforcement efforts means that either there will be fewer deportations or the deportations will be more expensive for the federal government. This is one reason these laws have so rankled Mr. Trump and Mr. Sessions.

The Justice Department lawsuit emphasizes that immigration is a federal matter, that we must have a uniform scheme to oversee it and that this scheme is being undermined by sanctuary laws. In most states, federal immigration authorities are able to leverage state and local criminal justice systems. The Justice Department is arguing that California’s refusal to participate requires it to adapt and employ different enforcement strategies.

It is fair to ask whether states should have the power to abstain from federal law enforcement programs that they view as immoral or adverse to their local interests. It is not, however, a new question.

In fact, the question was decisively answered by the Supreme Court in 1997 in a case called Printz v. United States. That case involved a challenge to the federal Brady Act, which required local sheriffs to conduct background checks for gun purchasers. Some sheriffs resisted because they objected to the federal regulation of firearms. The Supreme Court, in a decision written by Justice Antonin Scalia, made clear that the sheriffs, and states generally, have a right to abstain from federal law enforcement schemes with which they disagreed.

Attorney General Sessions’s attempt to spin his attack on sanctuary laws as a logical extension of the Supreme Court’s Arizona decision is a transparent attempt to sidestep the clear rule established in Printz.

As California’s attorney general, Xavier Becerra, recently explained, “California is in the business of public safety, not in the business of deportations.” By exercising their constitutional right to stay out of the business of deportation, California and other sanctuary jurisdictions have been able to strengthen ties between local law enforcement and immigrant communities. Those ties, in turn, mean that immigrant witnesses and victims of crime are not fearful of coming forward to assist the local police. That is why a recent report by the Center for American Progress demonstrated that, contrary to Mr. Trump and Mr. Sessions’s heated rhetoric, sanctuary laws improve public safety by driving down overall crime rates.