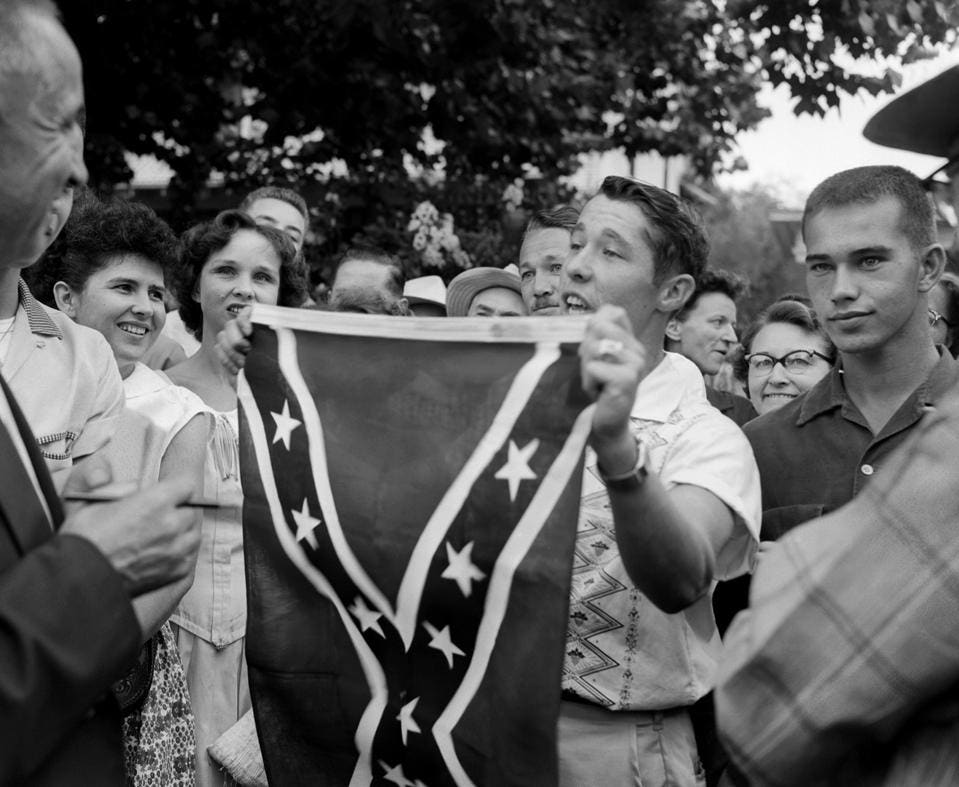 "White voters turning 70 this year are among Donald Trump’s most enthusiastic demographic blocs. His support weakens in younger age groups, especially those too young to have been shaped by Jim Crow. Shift to an older demographic in which voters, like former President George H.W. Bush, remember Hitler, and Trump’s support softens.

Oddly, in a nation reaching new heights of prosperity, freedom and international power, many white voters born in 1946 are lathered into a panic, desperate to “Make America Great Again.” Their hysteria defies ready explanation, but clues might be uncovered with a survey of their formative years. This is America's last generation raised under Jim Crow.

Like Donald Trump, white voters turning 70 this year had already reached adulthood in 1964, the year that the first Civil Rights Act was passed. They started kindergarten in schools that were almost universally white. Most were in third grade when the Supreme Court decided Brown v. Board of Education. A good number of them would complete their public education in formally segregated schools.

Among those who played sports in school, few would ever compete against a black player. They would be 17 the first time a black player was allowed on the field in a college football game against a Southern SO -0.72% school, a game in which the crowd chanted “kill the n****r.” These voters would be 35 years old when Vince Evans became the NFL’s first black first-string quarterback.

When this generation applied to college, higher education was a carefully groomed preserve of white men, insulating them not only from racial minorities, but competition from women. Virtually every administrator, professor and admissions officer was a white man. Most colleges had begun granting admission to women, but they were still barred from some of the country's most elite institutions. Women were not admitted as undergraduates at Yale until 1969. Voters born in 1946 were 29 years old before the first woman would be allowed to head a major research university.

Men born in 1946 enjoyed similar social and economic protections if they skipped college. Unions, like the academy, were a white domain. As with academia, some unions allowed limited minority or female participation, but leadership was almost universally male and white. White men graduating from high school in 1964 found that almost all government jobs, from local positions with police and fire departments to professional positions in the federal civil service, were set aside just for them.

If they ever landed in trouble, white men found their behavior adjudicated by other white men. With only the rarest exceptions, every police officer, judge, prosecutor, defense attorney, bailiff and jailor they faced was a white man. When they became adults, every minister they encountered was a white man. Every banker, attorney, accountant, realtor, doctor or bureaucrat they dealt with was a white man. Most of these voters would be in their forties or fifties before ever interacting a black professional in any capacity. Growing up, nearly every black person or woman they encountered occupied a subservient position.

Across roughly half of America, voters born in 1946 would have been adults before they ever saw a black person eat in a restaurant dining room, stay in their hotel, or enter a restroom with them. In the South, these voters spent all of their formative years drinking from the whites’ only fountain.

When these voters were buying their first homes, their black peers were still blocked from obtaining a conventional mortgage, keeping prices low for white buyers and protecting their preferential access to credit. Voters born in 1946 would be 28 years old before women acquired the right to get a credit card in their own name. They had reached the age of 26 before a woman would head a Fortune 500 company. They would live more than 40 years before ever seeing a black man head a Fortune 500 company. They would be halfway through their careers before realtors were forced to start showing black buyers homes in white neighborhoods.

Voters born in 1946 would be at least 24 years old before they saw their first interracial kiss on TV (on Star Trek in 1968). Many if not most of these voters would be well into their forties or fifties before they ever saw a black character on film who was not playing a criminal, a slave or a buffoon.

In 1971, no woman had ever been elected Governor without assuming her husband’s seat. These voters would be 30 years old the first time an openly gay man, Harvey Milk, would win elected office in the United States. Milk was assassinated two years later.

They would reach their sixties before seeing a black man become President. Some would respond by launching the Tea Party. In 2016, many would help nominate Donald Trump and screech their intention to “Make America Great Again.”

White voters born in the same year as Donald Trump would spend much of their lives in a world crafted to reinforce their sense of racial superiority. They came of age protected like a Soviet state-owned factory. Exposed suddenly to competition, some are not thriving. They are experiencing very real trauma as the world they once knew, a world dedicated to their protection, erodes away.

Explanations are not excuses, but history can at least shed light on their otherwise baffling behavior. For the last Jim Crow generation, making America great again has a special meaning. What was great for them was not quite so great for everyone else."