How Moon Jae In Brought North Korea to Negotiate - The Atlantic 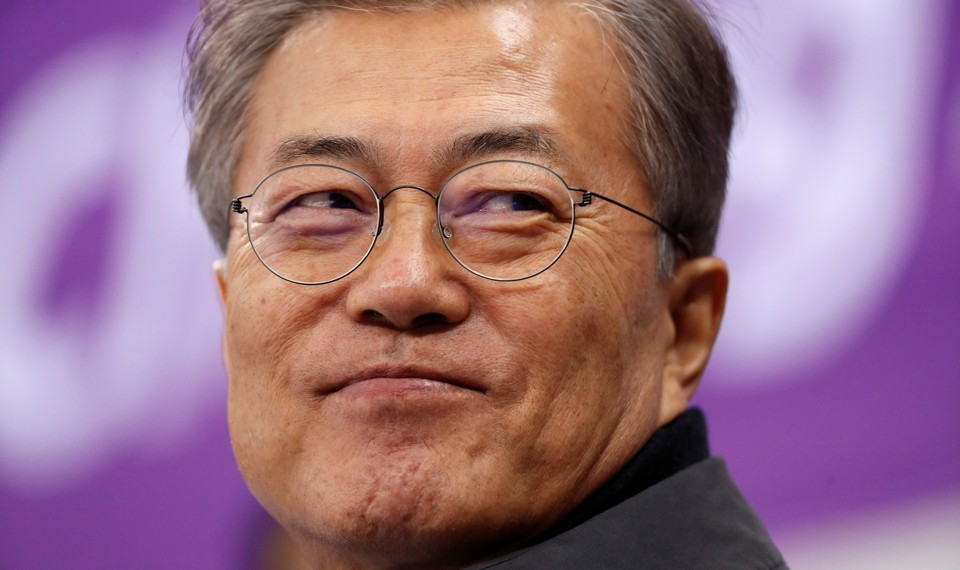 Finally, a writer telling what was obviously going on.

"Kim Jong Un and Donald Trump are the volatile, captivating stars of North Korea’s nuclear drama—including the shocking twist last week in which Trump said he would accept Kim’s reported offer of a summit meeting. Given the outsized personalities at center stage, it’s easy to forget who is actually directing the plot: South Korean President Moon Jae In, who over the past eight months has been quietly pushing events to this point.

There was nothing inevitable about Moon’s centrality to the action. When Moon declared his intention, shortly after his election last year, to put Seoul in the “driver’s seat of the Korean Peninsula,” a derisive chuckle spread across the globe. The idea that South Korea, not the United States or China, intended to handle the alarming problem of a nuclear North Korea seemed absurd. Moon’s domestic political adversaries scoffed; the opposition People’s Party said Moon was “not even in the front passenger seat.” The United States, too, was skeptical, regarding Moon as an anti-American liberal who would try to revive his liberal predecessors’ engagement-oriented policy—one that some U.S. conservative leaders likened to appeasement. Meanwhile, China was waging a low-grade trade war against South Korea, demanding that Seoul remove the American-made missile-defense system partially deployed in the South to protect the U.S. forces stationed there. Moon’s “Berlin Speech,” in which he outlined his basic approach to North Korea, received little international notice.

His first big challenge came in July 2017, when North Korea tested a long-range missile that could theoretically reach the U.S. mainland. Moon, a former special-forces paratrooper, responded by defying his reputation as a dove and staging a “decapitation” missile drill of his own—one designed to demonstrate South Korea could take out Kim himself should armed hostilities break out. Chinese pressure notwithstanding, he also ordered the full deployment of the missile-defense system (known as terminal high-altitude area defense, or THAAD), earning the trust of the Trump administration. That November, Moon convinced Chinese President Xi Jinping to desist from all THAAD-related economic retaliations despite the full deployment. His managing to convince Beijing, Pyongyang’s most important ally, to stay mostly on the sidelines during this period is a truly underrated achievement.

Then in January this year, Kim Jong Un announced North Korea’s intention to attend the Pyeongchang Winter Olympics. Moon quickly agreed; the two Koreas entered the opening ceremony together and fielded a joint women’s ice hockey team. The gesture came at a political cost to Moon, however. It was unpopular among South Koreans—as a decline in Moon’s approval ratings demonstrated. Meanwhile, a chorus of American observers fretted that North Korea was waging a charm offensive to drive a wedge between Seoul and Washington. Reports of a gaping fissure between the American and South Korean positions on North Korea surfaced.

Yet Moon balanced demonstrating the willingness to hold talks with requiring strict conditions from North Korea. He gave a warm welcome to Kim Jong Un’s sister Kim Yo Jong, who served as an envoy for North Korea, but rebuffed her invitation for an inter-Korean summit, insisting on “guarantees of a certain result.” On the other hand, Moon also managed to nudge the United States—where there were whispers about the possibility of a limited “bloody nose” strike to punish Kim shortly before the Olympics—toward peaceful negotiation by assuring that North Korea would not receive any concession just for showing up to talk. Then, after Vice President Mike Pence met with Moon at the Olympics, he said the United States would begin a dialogue with North Korea without preconditions.

Moon’s deliberate pace of Olympics diplomacy appears to have made North Korea eager; Pyongyang sent yet another envoy to attend the closing ceremony and hold further talks. Then on March 5, South Korea’s envoys visited Pyongyang. Kim Jong Un himself appeared with his wife to meet with Suh Hoon, South Korea’s spy chief, and Chung Eui Yong, its national-security adviser. They dined together for over four hours at the Workers’ Party headquarters, making the envoys the first South Koreans to enter North Korea’s equivalent of the White House.

The envoys then returned to Seoul with an agreement with Kim Jong Un, who had made a stunning array of concessions that touched upon virtually all major topics in inter-Korean relations. Kim Jong Un reportedly agreed in principle to a nuclear-free Korean Peninsula, to an inter-Korean summit next month, and to the establishment of the first-ever direct hotline between the two Koreas’ leaders. Kim also pledged not to use nuclear or conventional weaponry against South Korea, the first time a North Korean leader made such a promise. Most importantly, he agreed to begin discussions with the United States for denuclearization and suspend nuclear and missile tests during the talks.

Then South Korea’s envoys headed to Washington, where they relayed Kim’s invitation for a summit meeting—which Trump accepted immediately. In a moment of apt symbolism, it was South Korea’s Chung Eui Yong who announced the news from the White House driveway, unaccompanied by any American officials.

Of course, no one knows whether the U.S. president (or the North Korean leader, for that matter) will fulfill his end of the bargain. On Friday, Sarah Huckabee Sanders, the White House press secretary, said Trump “will not agree to the meeting without concrete steps and action,” fueling speculation that he wanted to leave himself an out. It’s also unclear whether Trump is prepared for a face-to-face meeting with Kim. There have been none of the low-level meetings between U.S. and North Korean officials that usually precede a summit meeting, and the Trump administration lacks the personnel to conduct them, as it has no ambassador to South Korea or permanent top diplomat for East Asia in the State Department. China could also break its relative silence and play spoiler, if it sees the talks among the U.S., South Korea, and North Korea as encroaching upon its interests.

But no matter what, in many ways, Moon Jae In has already won. Moon’s approval rating has climbed back over 75 percent, making him once again the most popular leader in the free world. He has flipped the script on North Korea’s traditional strategy of “tongmi bongnam,” (“deal with the U.S. and isolate the South”) by making the South the indispensable intermediary. And the fact that Trump’s State Department is understaffed means Seoul’s diplomats will have to take on a greater role. If the announced schedule holds, the inter-Korean summit will happen on April, followed by the U.S.-North Korea summit in May. This puts the Trump administration in the position of following South Korea’s lead.

Trump and Kim may be the ones making headlines, but it was Moon who drove the entire process. In just eight months, he kept China on the sidelines, rebuffed North Korea’s attempt to drive a wedge between South Korea and the United States, pushed North Korea to put denuclearization on the table, and nudged the U.S. to step away from a preventive strike and talk to Pyongyang—to the point that Donald Trump, if he follows through on his pledge, would become the first U.S. president to hold a summit meeting with North Korea. And to the extent that giving Trump all the credit helps Moon steer him, the South Korean leader will be perfectly content to leave the spotlight to others."

How Moon Jae In Brought North Korea to Negotiate - The Atlantic