Single Mothers Are Not the Problem - The New York Times 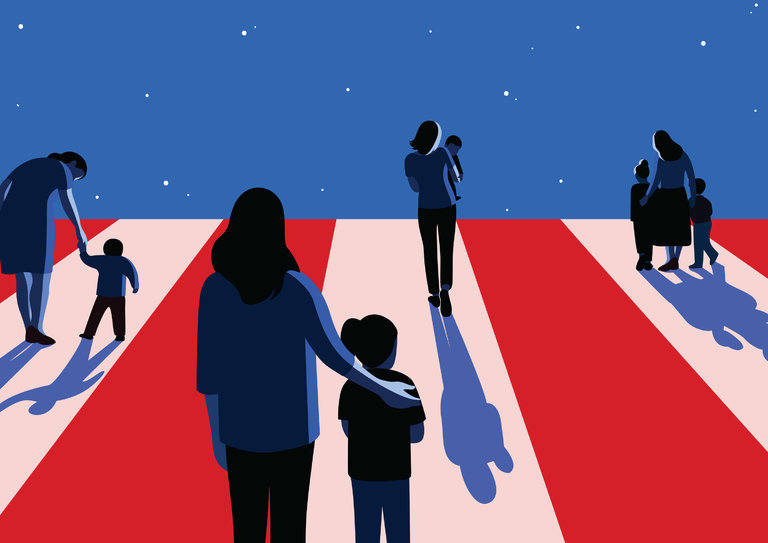 "No group is as linked to poverty in the American mind as single mothers. For decades, politicians, journalists and scholars have scrutinized the reasons poor couples fail to use contraception, have children out of wedlock and do not marry.

When the American Enterprise Institute and the Brookings Institution formed a bipartisan panel of prominent poverty scholars to write a “Consensus Plan for Reducing Poverty” in 2015, its first recommendation was to “promote a new cultural norm surrounding parenthood and marriage.”

The reality, however, is that single motherhood is not the reason we have unusually high poverty in the United States, compared with other rich democracies. In fact, we recently published a study in The American Journal of Sociology, using data from the Luxembourg Income Study, which demonstrates that reducing single motherhood here would not substantially reduce poverty.

Single-mother families are a surprisingly small share of our population. Among households headed by working-age adults, 8.8 percent of people lived in single-mother households in 2013 — the most recent year we were able to analyze. The share of people in single-mother households actually declined from 10.5 percent in 1980 and has increased only modestly since 1970, when it was 7.4 percent. True, compared with other rich democracies, America does have a relatively high portion of families headed by single mothers. Nevertheless, we still fall below Ireland and Britain and are quite similar to Australia and Iceland.

If single motherhood in the United States were in the middle of the pack among rich democracies instead of the third highest, poverty among working-age households would be less than 1 percentage point lower — 15.4 percent instead of 16.1 percent. If we returned to the 1970 share of single motherhood, poverty would decline a tiny amount — from 16.1 percent to 15.98. If, magically, there were no single mothers in the United States, the poverty rate would still be 14.8 percent.

Such a severe penalty is unusual. In a majority of rich democracies, single mothers are not more likely to be poor. Denmark, for example, has chosen to provide universal cash benefits and tax credits for children, publicly subsidized child care and health care, and paid parental leave. Because of these generous social policies, single mothers and their children have a similar level of economic security as other families.

Single motherhood is one of four major risks of poverty, which also include unemployment, low levels of education and forming households at young ages. Our research demonstrates a broader point about the risks of poverty. Poverty in America is not unusually high because more people have more of these risk factors. They are actually less common here than they are in the typical rich democracy, and fewer Americans carry these risks today than they did in 1970 or 1980. Even if one infers that risk factors result from bad choices and behaviors, Americans apparently make fewer such choices and engage in fewer such behaviors than people in other rich democracies or than Americans in the past.

The reality is we have unusually high poverty because we have unusually high penalties for all four of these risk factors. For example, if you lack a high school degree in the United States, it increases the probability of your being in poverty by 16.4 percent. In the 28 other rich democracies, a lack of education increases the probability of poverty by less than 5 percent on average. No other country penalizes the less educated nearly as much as we do.

More generous social policies would reduce the penalty for all four risk factors. In fact, increasing the generosity of American social policies would lower poverty more than increasing high school graduation or employment, and more than decreasing the number of people heading a household at a young age or the number of single mothers. Nor would reducing these penalties encourage people to drop out of high school, be unemployed, form households too young or become single mothers.

Ultimately, there simply aren’t enough single mothers to explain our high poverty. Even if they all married or never had children, poverty would not be substantially lower. We should stop obsessing over how many single mothers there are and stop shaming them.

Instead — even though we all get sick of hearing about how great Scandinavian countries are at handling these issues — we should be following the lead of countries like Denmark. If we did, we could reduce poverty among all American families, including those headed by single mothers. No amount of stigmatization could do the same. Rather than falsely claiming that single motherhood is a major cause of poverty, we should support single mothers in raising America’s children."

Single Mothers Are Not the Problem - The New York Times
Posted by John H Armwood II at 7:24 AM