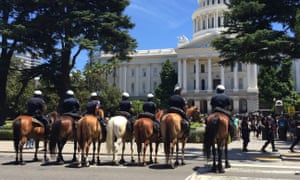 "California police investigating a violent white nationalist event worked with white supremacists in an effort to identify counter-protesters and sought the prosecution of activists with “anti-racist” beliefs, court documents show.

The records, which also showed officers expressing sympathy with white supremacists and trying to protect a neo-Nazi organizer’s identity, were included in a court briefing from three anti-fascist activists who were charged with felonies after protesting at a Sacramento rally. The defendants were urging a judge to dismiss their case and accused California police and prosecutors of a “cover-up and collusion with the fascists”.

Defense lawyers said the case at the state capital offers the latest example of US law enforcement appearing to align with neo-Nazi and white supremacist groups while targeting anti-fascist activists and Donald Trump protesters after violent clashes...