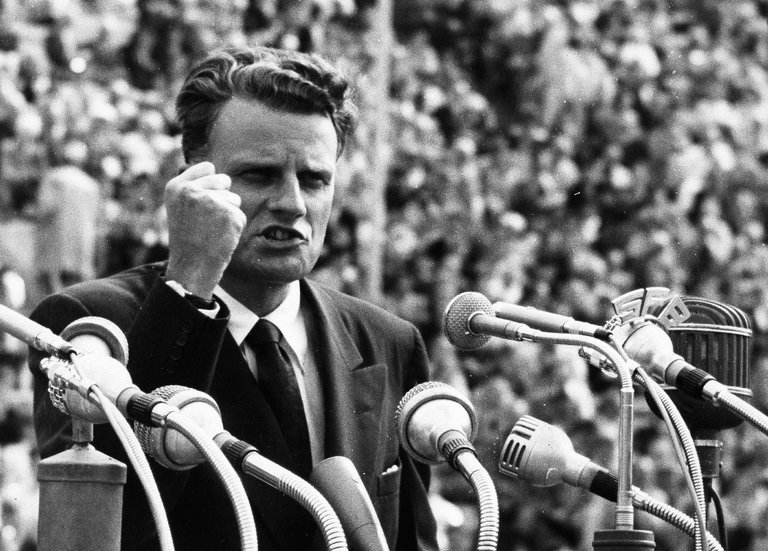 ..."Liberal Protestants in the United States and Germany felt themselves caught in the middle of Mr. Graham’s bifurcated world. While prominent theologians like the German Lutheran pastor Martin Niemöller and the American theologian Reinhold Niebuhr supported Germany’s democratization, they protested Mr. Graham’s equation of Christianity with America, anti-Communism and free-market capitalism. If many mainline protestants had used similar language in the immediate aftermath of World War II, by the mid-1950s they had departed drastically from seeing socialism as anathema to Christianity. Mainline liberals accused Mr. Graham of raising international tensions by identifying Berlin as the beacon of the West in a sea of Communist red. His call for spiritual armament risked a new military conflict.

After the Watergate scandal, Mr. Graham withdrew from political debates and returned to his early focus on simply “preaching the gospel.” Yet his role in provoking a global debate about the shape of democracy, capitalism, nationalism and secularism in the modern world remains one of his lasting legacies. If the Cold War is gone and the evangelical culture wars have lost much of their steam, we remain ensconced in similar debates today, and — despite recanting his theopolitics in the end — the alliances that Mr. Graham forged and the battle lines he drew have endured. In this respect, God’s Machine Gun was tragically prophetic of our modern world."