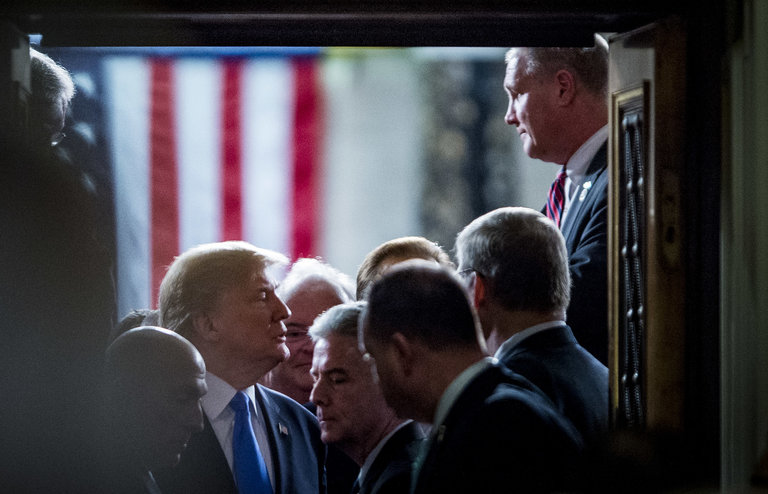 “This, in fact, is our new American moment,” President Trump declared in his State of the Union speech. “There has never been a better time to start living the American Dream.”

But which American Dream? Trump portrayed a dark and menacing world in which immigrants, who stand at the heart of the American idea, were equated with gangs, murderous criminals and “horrible people.”

In his 80-minute speech, the word “woman” did not come up once. Other words or phrases never mentioned included “peace,” “human rights,” “equality,” “Europe,” “multilateral,” “civil rights” and “alliance.” The Constitution flitted onto Trump’s radar chiefly in the context of appointing his kind of judges.

If there was a theme, it was the demonization of immigrants and of the rest of the world, combined with an exaltation of American might. He spoke of building a “Great Wall” on the Mexican border, but it may as well have been against the rest of humanity. Trump once again put the world on notice that the rules-based, post-1945 world order founded on alliances like NATO and American-backed multilateral organizations is one he would rather shred than bolster.

Of course, the world has learned that this president’s bark is worse than his bite. Still, he keeps on barking. That is not reassuring.

In perhaps his clearest signal of contempt for the views of allies, Trump announced that he had signed an executive order revoking President Barack Obama’s January 2009 order to close the Guantánamo Bay detention facility. Trump’s order directs that “the United States may transport additional detainees to U.S. Naval Station Guantánamo Bay when lawful and necessary to protect the nation.”

Guantánamo, where detainees may be held indefinitely as “enemy combatants,” is widely viewed around the world as a facility incompatible with the American principles of fair trial, human rights and the rule of law.

Obama never managed to close it, even though this was his intent. Still, Trump’s decision to reinvigorate the facility will be seen by many as a signal of an American return to the excesses of the war on terror — the use of torture, extraordinary renditions and C.I.A. “black sites.”

Admiral Dennis Blair, the former Director of National Intelligence, once said that the “detention center at Guantánamo has become a damaging symbol to the world and that it must be closed. It is a rallying cry for terrorist recruitment and harmful to our national security, so closing it is important for our national security.”

Trump spoke of American grit, of “total American resolve,” of American heart and American hands, whipping his audience into chants of “USA! USA! USA!” Trump’s America is, in the end, a reflection of himself: male, militaristic, white, mean and macho.

He made a gesture here and there — backing paid family leave and saying he would let immigrants brought to the United States as children stay and become citizens over a 12-year period — but his core message was nationalistic, nativist, harsh and defiant.

Russia was the 800-pound gorilla in the room. Trump barely mentioned it, even as the investigation into Russian interference in the 2016 election gathers pace. This was consistent with Trump’s year-old policy toward President Vladimir Putin of Russia: He has none because to have one would be too risky.

The military was “great.” America’s nuclear arsenal was to be modernized, if “hopefully” not used. Federal workers deemed to be disloyal were to be summarily fired. Gun control, of course, was a non-subject. This is the America that Trump imagines he is making great again.

As for immigrants, the president had not a kind word. You would not guess from Trump’s words that a Cato Institute study of refugees admitted to the United States between 1975 and 2015 found that the chance of an American being killed in a terrorist attack committed by a refugee is 1 in 3.64 billion. Nor that of the companies that made the Fortune 500 list in 2017, 43 percent were founded by an immigrant or the child of an immigrant, according to research from the Center for American Entrepreneurship.

Trump is not interested in hope, any more than he is interested in facts. He said, “the era of economic surrender is over.” So much “surrender” that Trump, a year ago, took over a strong economy with low unemployment.

In the place of hope, Trump needs fear, a lot of it, to build the cult of his personality. His so-called American Dream is made up of the nightmares he imagines and that now hang over the world."