Trump’s Long, Low-Energy SOTU Changed Nothing. The White House promised a speech calling for unity. Instead we got nativism, jingoism, and gibberish. | The Nation 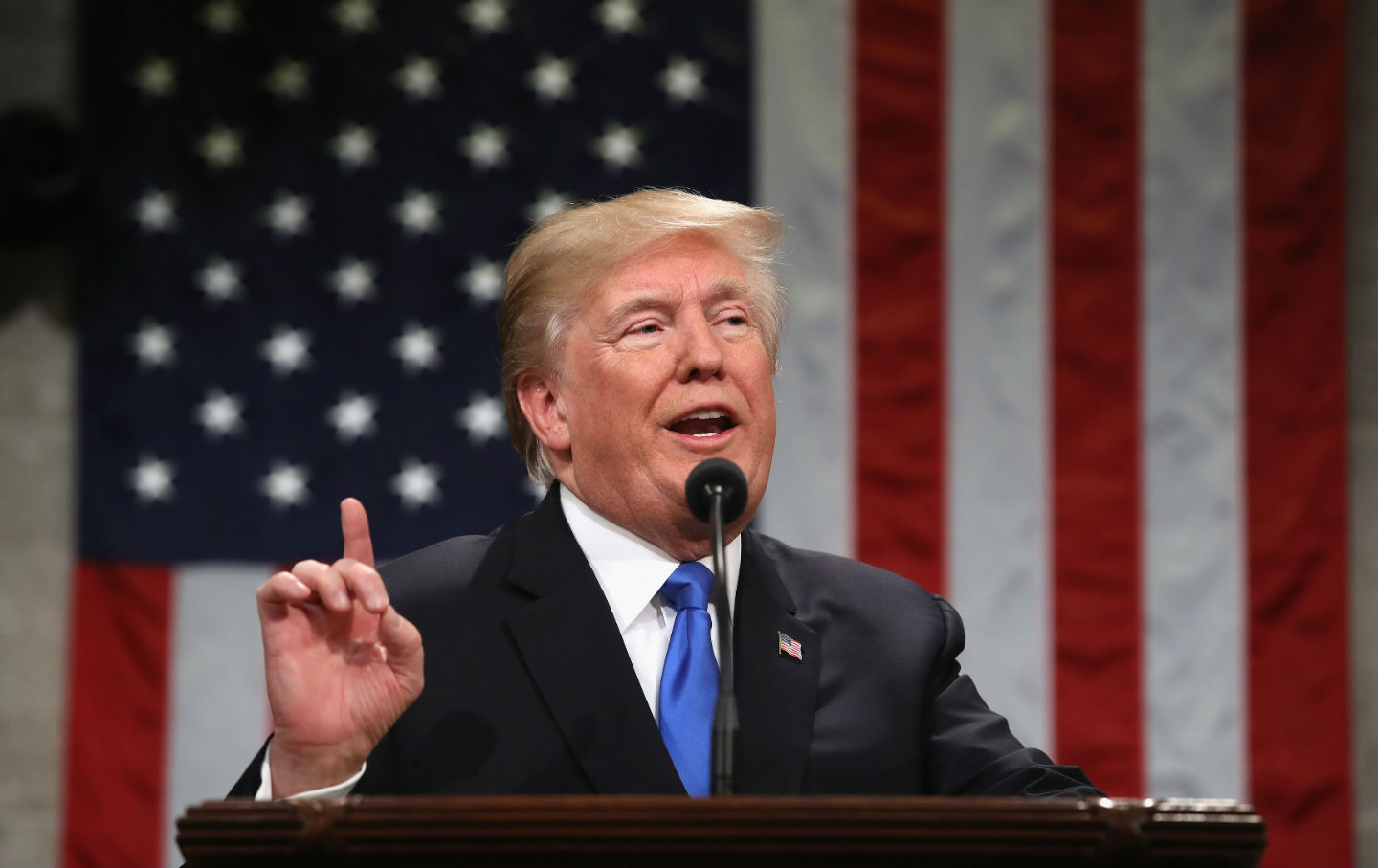 "What the hell was that?

I’ve lived through many moments of American political fakery, but Donald Trump’s first official State of the Union address made them look like genuine world-shifting events. Hours before the speech, his administration and Pundit Nation promised us the theme would be “unity.” Instead, we got nativism and jingoism, gibberish, heavy breathing, and appeals to divisions of every imaginable sort. Near the end, Trump got the now-docile Republicans in his audience to jump to their feet chanting “USA, USA,” like sports fans after too many beers.

There was even a direct appeal to drunk white sports fans: Trump took a moment to trash the black athletes who take a knee during the national anthem, by first praising a young white boy who makes a practice of planting American flags on veterans’ graves. “Preston’s reverence for those who have served our nation reminds us why we salute our flag, why we put our hands on our hearts for the Pledge of Allegiance, and why we proudly stand for the national anthem,” Trump intoned. Republicans in the audience thrilled to the message, as did his base at home.

But to the extent that there were any soaring moments (nope) or successful arguments (yes for his base, maybe for the pundits), they will be forgotten within days, more likely hours, against the backdrop of the crisis of democracy that got more dangerous just in the last 36 hours. On Monday, the Trump administration ousted FBI Deputy Director Andrew McCabe over his role in the bureau’s investigation into Russian election meddling as well as its 2016 Hillary Clinton e-mail probe. The same day, Representative Devin Nunes and the GOP majority on the House Intelligence Committee released a memo attempting to discredit the Russia investigation, and at the same time suppressed the Democratic response to the memo. While almost no one paid attention, the White House announced that it would not extend the sanctions against Russia for that election meddling, passed by Congress last year with overwhelmingly bipartisan support.


Thus did the Dreamers, who Trump purports to want to keep in the country, get entwined with the violent MS-13, as Trump talked about one, and then the other, and then went back to MS-13 again. Trump claims he wants a DACA deal, but he used SOTU to demand that it include an end to the “diversity visa lottery” and “chain migration.” The visa lottery, he said, “randomly hands out green cards without any regard for skill, merit or the safety of the American people.” He blamed “chain migration” for what he called two “recent” terror attacks on New York City. I believe he was talking about the driver who ran down bicyclists along the West Side Highway in October and the man who tried and failed to set off a suicide bomb in the Port Authority in early December. He never sent thoughts or prayers to the New Yorkers who endured those attacks, but on Tuesday night he used them to attack immigrants, who made this city (and country) what it is. So we see him...
Trump’s Long, Low-Energy SOTU Changed Nothing | The Nation
Posted by John H Armwood II at 12:21 PM