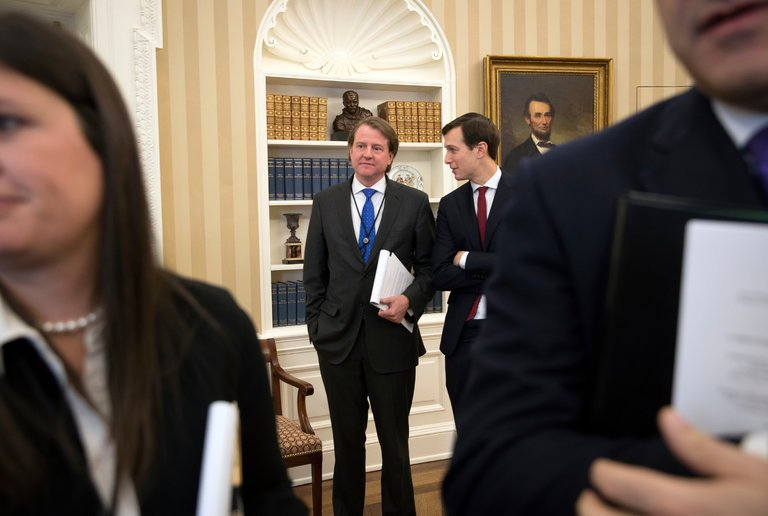 "Thursday’s report in The Times that President Trump ordered the firing of the special counsel Robert Mueller last June, only to back off after the White House counsel, Donald McGahn, threatened to resign, is explosive on many levels.

On the surface, the revelation is one more piece of damning evidence in the now-overwhelming case of obstruction of justice that Mr. Mueller has assembled. The core of the case — the Feb. 14 meeting in which Mr. Trump asked the director of the F.B.I., James Comey, to drop the investigation against the national security adviser, Michael Flynn; Mr. Trump’s subsequent sacking of Mr. Comey; and Mr. Trump’s serial lies about Mr. Comey’s firing — has long been solid. And Mr. Mueller has added significant pieces of circumstantial evidence, such as Mr. Trump’s apparent knowledge that Mr. Flynn had lied to the F.B.I. when he buttonholed Mr. Comey.

Thursday’s revelation seals the deal. The president’s attempted ouster of Mr. Mueller seems plainly to have been intended to squelch Mr. Mueller’s investigation. Moreover, Mr. Trump’s attempts to conceal the obvious with a rank, virtually comical explanation provide additional evidence of guilty intent. Mr. Mueller, the president argued, could not serve because, years before, he had resigned his membership at the Trump National Golf Club in Virginia because of a dispute over fees; or he needed to be fired because he had worked at the law firm that previously represented Mr. Trump’s son-in-law, Jared Kushner.

Why strain to concoct such feeble rationales unless the truth is indefensible?

Then there is the provocative point that Mr. Trump’s efforts were parried by the threat to resign of his own White House counsel, Mr. McGahn. White House counsels are not in the habit of bucking their bosses that way; it’s an extraordinarily rare event.

Mr. McGahn obviously feared at least a political firestorm. Yet if that was all he feared, one would expect him to have saluted and carried out the president’s orders. Concerns about politics aren’t a hallmark of Mr. McGahn’s tenure, to say the least. The threat to resign carries with it the possible implication that he saw more: a crime, even a continuing conspiracy, that he wanted to distance both Mr. Trump and himself from.

Continue reading the main story RELATED COVERAGE graphic Why Does President Trump Fear the Truth? JAN. 26, 2018 RECENT COMMENTS Taz 6 hours ago All hell will break loose the day that Mueller announces an obstruction charge against Trump. We'll be tossed headlong into overlapping...

MK 6 hours ago Roy Cohn is laughing in whatever hell there might be. The current crop of lawyers know that Trump would turn on them in a nano second, and...

M 6 hours ago He looses law suits, bankrupts businesses, but screams from the tallest building that he won, that he breathes success. Along comes reality...

That sort of intervention is consistent with more principled motives and a desire to save Mr. Trump not only from himself but also from despoiling the presidency (which the White House counsel in fact represents). It’s also consistent with the Washington tradition of self-serving conduct with an eye toward ensuring that you don’t go down with the ship. Perhaps in this case it was both.

Newsletter Sign UpContinue reading the main story Sign Up for the Opinion Today Newsletter Every weekday, get thought-provoking commentary from Op-Ed columnists, the Times editorial board and contributing writers from around the world."

(Via.).  Trump’s Efforts to Oust Mueller Show the ‘Cancer’ on This Presidency - The New York Times: "