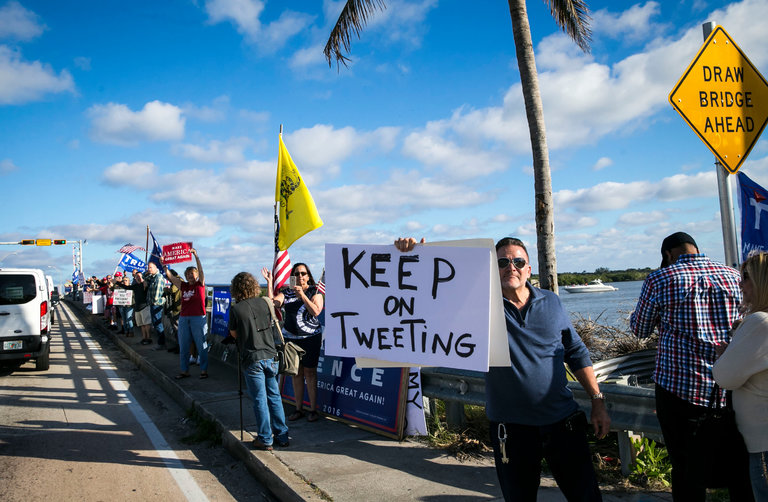 "On Tuesday, Donald Trump unleashed yet another tweet storm from within his unceasing drought of competence.

In a series of 16 tweets, Trump lied, boasted, lashed out, bemoaned, provoked, belittled and prodded.

In other words, Trump began this year the way he ended the last one: eroding and reducing the office of the presidency on a daily basis.

His most consequential tweet was a boast about destructive power:

“North Korean Leader Kim Jong Un just stated that the ‘Nuclear Button is on his desk at all times.’ Will someone from his depleted and food starved regime please inform him that I too have a Nuclear Button, but it is a much bigger & more powerful one than his, and my Button works!”

Sir, this is not a missile-measuring contest. No one wants to think about the size of your button. You seem to think that the effects of a nuclear strike would be the verification of your virility rather than the loss of innumerable lives.

This is not the way you conduct diplomacy. You don’t get into a Twitter battle with another world leader. You don’t drag America down because you want to pump yourself up.

It’s not about you! But in Trump’s universe, he is the center around which everything and everyone else orbits.

He is so addicted to adulation and allergic to even the most legitimate of criticisms that he is rendered emotionally helpless, constantly boxing with shadows and dodging the truth.

In his mind, no one is ever fair to him, because for him fairness is being allowed to lie with ease, profit with impunity and defy convention without consequence.

This is why we keep seeing these outbursts: A man who built a life and a career flouting the rules is being forced to play by them and may even be punished under them. There is no way to stop the process that is already in progress.

The special counsel, Robert Mueller, and his team show up every day working on their investigation and building their cases. We have no idea what they know, but it is clear their search weighs heavily on Trump.

Trump is trapped. He and his minions can lie to the public, but they can’t lie to Mueller. Whatever truth there is to find, Mueller will find it. And from what we already know, there seems to have been quite a bit of funny business within the Trump campaign.

Even the disheveled, self-important, would-be impresario Steve Bannon won’t deny the stench that emanated from Trump Tower during the campaign. According to The Guardian, in Michael Wolff’s forthcoming book “Fire and Fury: Inside the Trump White House,” Bannon described the Trump Tower meeting between Donald Trump Jr. and a group of Russians during the 2016 election campaign as “treasonous” and “unpatriotic.”

Trump didn’t take well to his former disciple’s apostasy, saying in a statement:

“Steve Bannon has nothing to do with me or my Presidency. When he was fired, he not only lost his job, he lost his mind.”

That’s a lie. Steve Bannon had everything to do with Trump and his presidency. Bannon was the brain to Trump’s bluster. That is to say not that Bannon was particularly smart but that he was sinisterly manipulative.

The same way that Bannon has an almost supersensory ability to divine ways to tie together white supremacy, cultural anxiety, class warfare, xenophobia and government distrust, Trump is supremely aware, on a gut level, that we live in an attention economy.

So, through it all, and perhaps because of it all, Trump frantically slings spaghetti at the wall, in the hope that some strands will stick and also that the wall itself will become defaced.

If this were almost any other person, we could simply ignore him and starve the beast of oxygen. But we can’t. This person is the president of the most powerful nation on earth. He won, even if aided by the enemy. He lives in the White House. He travels on Air Force One.

Trump has America, and indeed the world, in a vise grip. We want to ignore the absurdity of his every utterance, but to do so is on some level a civic and moral abdication.

We are adrift in Trump’s ocean of idiocy, hoping and praying that Mueller will toss us a lifeline."