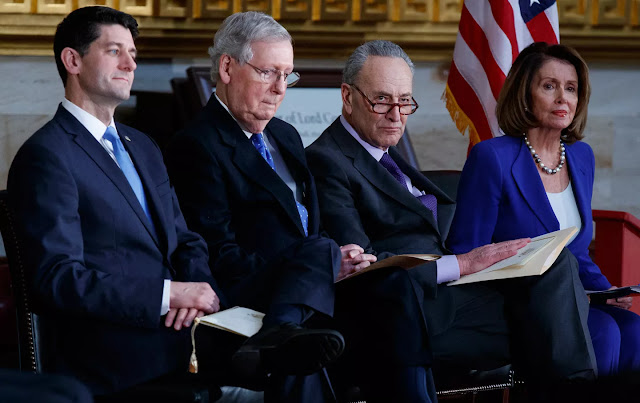 ...Let’s also remember: the only reason Democrats came this close to a DACA deal with Trump is that two weeks ago the White House invited reporters in to watch a bipartisan DACA discussion, in order to refute reports, most prominently in Michael Wolff’s damning Fire and Fury, that Trump is losing his faculties. In that 55-minute performance, the president showed himself to be nominally capable of helming a meeting, if a little loopy. He got enthusiastic about California Senator Dianne Feinstein’s suggestion that they produce a “clean DACA bill”—one that didn’t include other immigration fixes or border security funding—until House Majority Leader Kevin McCarthy told him that is not the GOP’s position. He promised to keep working toward a “bill of love,” insisting he would sign any bipartisan DACA deal the group brought him. “I’ll take the heat,” he told the group.
In fact, he couldn’t even take the heat from immigration hardliners in his own White House, including chief of staff John Kelly and anti-immigrant advisor Steven Miller. When the leaders of a bipartisan DACA working group went to see Trump two days later with their proposal, Senators Lindsey Graham and Dick Durbin were blindsided: Kelly and Miller had invited anti-immigrant Senator Tom Cotton and Rep. Bob Goodlatte. There was no chance of compromise. That was the infamous meeting where Trump derided some African nations as “shitholes” and whined that we should have more immigrants from Norway. That’s right: he flipped from demanding a “bill of love” to promoting a bill of racism—one that would include funding for his wall, end family reunification policies, terminate the diversity visa lottery, (which offers opportunities to would be African immigrants, among others) and shift entirely to “merit-based immigration,” presumably to bring us more folks from Norway....
...The danger is that the next round of negotiations winds up pitting not merely DACA kids against the American-born, but DACA kids against African and other immigrants who currently benefit from the visa lottery Trump and other conservative nativists want to end. Republicans are looking to fracture the Democrats’ multiracial coalition, because in a changing country, that’s the only way the overwhelmingly white GOP can stay afloat (well, that plus voter suppression and gerrymandering). I worry Democrats have helped them, by demoralizing their multiracial base, after a weekend when millions in the Resistance joined women’s marches all over the country, at which a deal for Dreamers was an explicit demand."
(Via.). The Chanc"es for a DACA Deal Won’t Be Better in February | The Nation:
Posted by John H Armwood II at 12:54 PM