My Button’s Bigger Than Yours - The New York Times 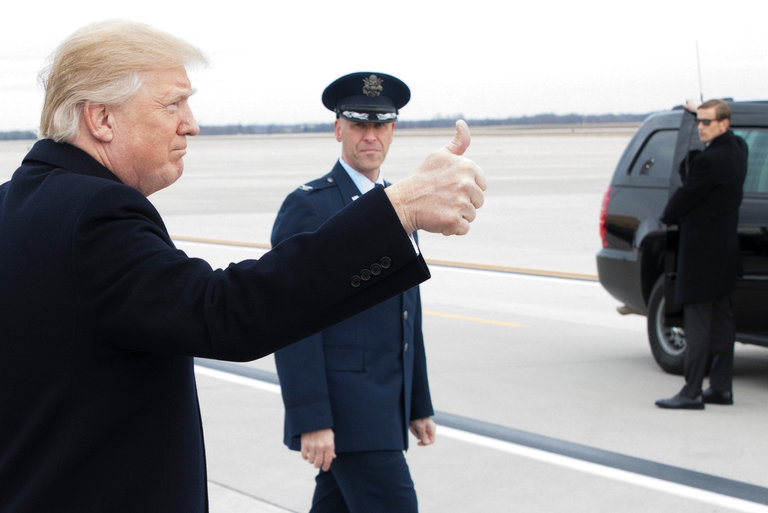 "So, to start the year, our president bragged that he has a “much bigger” nuclear button than the guy in North Korea.

Coming next week: Donald Trump and Kim Jong-un compare finger length, shoe and head size. That last is complicated by the fact that they have what are two of the worst government-leader haircuts in history. Honestly, you’d think Kim had executed every barber in his country.

If it wasn’t for the exploding-planet aspect of all this, it’d be sort of funny. We have here two very silly egomaniacs. Kim’s government claims that he learned to drive when he was 3 and that he makes breakthrough medical discoveries in the treatment of cancer in his spare time.

Meanwhile on our side, Trump recently gave himself credit for ending commercial airplane fatalities. (“Since taking office I have been very strict on Commercial Aviation.”) The White House — which spends its entire life explaining why the last crazy tweet wasn’t all that crazy — claimed this was due to the president’s “initiative to modernize air traffic control,” a proposal that was never passed into law. Also, the Federal Aviation Administration, which is in charge of air safety, is run by an Obama appointee.

Also, there haven’t been any commercial passenger deaths in the United States since 2013. And Trump once had an airline of his own that had a crash landing three months into operation, piled up massive debt and eventually folded. We could go on and on. As many did on Twitter. (“We had no gas explosions in our house this year. Thank you, Mr. President for your hands-on leadership.…”)

In North Korea, Kim celebrated the new year with an address to the people in which he assured them “that I have a nuclear button on the desk in my office. All of the mainland United States is within the range of our nuclear strike.”

Do you think the North Koreans felt that was a good way to welcome in 2018? On the one hand, they do seem to like the idea of being able to win a nuclear war with the United States. On the other hand, you can’t help wondering if some of them might have preferred a couple of nostalgic songs.

As Russell Goldman explained in The New York Times, Kim probably does not actually have a button — and it would take North Korea a long time to actually get its missiles ready to fire anywhere.

However, it’s perfectly possible his minions put a big, red, make-believe button on his desk to make him feel manly. This is, after all, a guy who pretends that he climbed the country’s highest mountain wearing a long topcoat and dress shoes. Whose dictator-father, according to an official biography, never needed to use a toilet.

Obviously, engaging in a public transoceanic personal argument with Kim is useless. But Trump responded that he had a nuclear button, too, and “it is a much bigger & more powerful one than his, and my Button works!”

The fighting between the two men goes way back, although on Trump’s part the insults (“maniac”) have been interspersed with totally opposite assessments (“smart cookie”). So all we know for sure about our side of the debate is that Trump doesn’t have a button, either. There is an aide carrying a briefcase, which is a little less threatening but of course much less awesome if you’re exchanging insults with a guy whose government claims he can make the weather change.

All this is the reason the whole nation is so excited about the return of Mitt Romney.

Really, two years ago if somebody told you that in 2018 Mitt might make a comeback by running for the Senate, you’d have found it a slightly less exciting prospect than a reboot for “American Idol.” But here we are. Suddenly Romney seems like the second coming of — oh, I don’t know, Dwight Eisenhower without the medals?

Everyone presumes Mitt could win a Senate election, and why not? He’s very popular in Utah. It’s a super red state, and no other Republican would run against him. Unless Steve Bannon finds another Breitbart centerfold the way he did in Alabama, and then we can have an exciting race with Romney versus a far-right puppy-beater who lives in a cabin on a hill surrounded by machine gun turrets.

So there he’ll be in the Senate, his old self-righteous self, waiting for the chance to take a principled stand against the White House. And maybe angling to take Trump on in 2020. It’s true that he’ll be 73 by then, but given the current lineup of presidential possibilities, that would make him a youth vote candidate.

Who would ever have thought that Mitt Romney could look that good? But at least he has all his buttons."

My Button’s Bigger Than Yours - The New York Times
Posted by John H Armwood II at 7:25 AM