John Kelly, Deacon of Deportation - The New York Times - Kelly is from racist Boston, from the era of racist violence in opposition to school integration. His racist opposition to DACA and dreamers is no surprise. It is the way he was raised just like Trump. 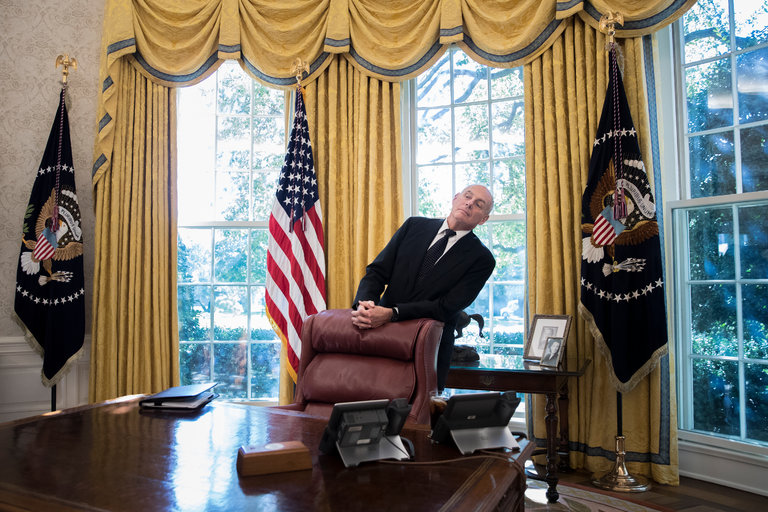 Kelly is from racist Boston, from the era of racist violence in opposition to school integration.  His racist opposition to DACA and dreamers is no surprise.  It is the way he was raised just like Trump.


"People correctly direct their ire about Donald Trump’s hostile, racist, anti-immigrant policies at Trump himself because, after all, this starts at the top.

But there is someone else in the administration, behind the scenes and in the shadows, who deserves more scrutiny and more condemnation for this administration’s approach to immigration: Chief of Staff John Kelly.

Kelly is often referred to as the man who was brought to the West Wing to impose must-needed discipline on a chaotic White House. He was the access granter and mood regulator for Trump. He was the adult to Trump’s child. He was the former general who had honorably served his country, now brought in to save it.

In the most recent kerfuffle over Trump’s torpedoing of a bipartisan DACA deal, in which he made a racist attack against immigrants from African countries and Haiti, it became increasingly clear that Kelly was instrumental in influencing Trump to flip from a stance of openness and compromise back to a celestial alignment with immigration hard-liners.

As The Associated Press reported this week, after Trump requested a briefing on a bipartisan immigration deal sponsored by Senators Lindsey Graham, a Republican, and Dick Durbin, a Democrat:

“Chief of staff John Kelly phoned Trump from Capitol Hill to advise him against accepting the proposal, and the president summoned conservative Republican negotiators to help build a united front against the plan, which would have provided some border security funding as well as protection from deportation for immigrants brought to the country as children and now here illegally.”

Graham was not happy about the ambush or the reversal and pointed out who he believed to be the source of the problem, telling reporters, “I think somebody on his staff gave him really bad advice between 10 o’clock to 12 o’clock on Thursday.” Graham went on to say that Kelly is “a fine man, but he’s part of the staff.”

This was just the latest incident in Kelly’s revealing track record on immigration since Trump has been in office.

Kelly is no angel. He’s more like the devil’s handmaiden. As The Times’s Glenn Thrush reported in October, Kelly seems to be “moving from the role of quiet backstage manager to open partisan.”

His hostility toward immigration has been evident from the beginning of his time in the administration.

When Kelly was brought on as chief of staff in July, The Nation warned, “John Kelly’s promotion is a disaster for immigrants,” pointing out that in just six months as secretary of the Department of Homeland Security, he turned it into “a deportation machine.”

The Nation went on:

“Indeed, in the last six months, Kelly has turned the DHS into one of the most productive arms of the Trump administration. Kelly managed to translate much of Trump’s brazen anti-immigrant campaign rhetoric into actual policy. And if the numbers are any indication, Kelly has certainly flourished. Arrests since Trump took office in February increased by 40 percent over the prior year. But perhaps more important than the numbers is Kelly’s impact on immigrant communities, where apprehension and fear now reign.”

While at the D.H.S., Kelly even considered separating immigrant parents from their accompanying children if they enter the country illegally. As The Times reported:

“Still, the prospect of breaking a sacred bond between parent and child has not been an easy decision. Mr. Kelly said early this year that he was considering the move, but after an uproar from immigrant advocates and some members of Congress, he said that families would be separated only in extreme circumstances, such as when the child was in danger because of the parent.”

One of Kelly’s primary targets has been the Temporary Protected Status program.

As The Times has reported: “The protection for Haitians was most recently extended in May, by John F. Kelly, the Homeland Security secretary at the time. He allowed only a six-month extension, a shorter one than is typical, saying that the Haitians ‘need to start thinking about returning.’”

The Times also reported that in November, Kelly “unsuccessfully tried to pressure the Homeland Security Department to end a program that allows hundreds of thousands of people from countries affected by natural disasters or violence to live in the United States without fear of being deported, according to people familiar with the discussions.”

Many of those countries have populations that are either black or brown. Those were the countries Trump vulgarly disparaged. So why are Trump and Kelly so dogged in their opposition to these particular programs?

I, along with many others, have pointed out Trump’s obvious racism, but Kelly’s relationship to race is also troubling.

In October, Kelly said that “Robert E. Lee was an honorable man” and that “the lack of an ability to compromise led to the Civil War,” displaying a staggering ignorance about the conflict and a racial insensitivity that marginalized the centrality of slavery to the war.

Furthermore, while at D.H.S., Kelly appointed the Rev. Jamie Johnson to lead the Center for Faith-Based and Neighborhood Partnerships. It was later disclosed that in 2008 Johnson had said on a radio show that black people were anti-Semitic because they were envious of Jewish people. Johnson also said America’s black community “had turned America’s major cities into slums because of laziness, drug use and sexual promiscuity.”

I am no fan of John Kelly. As I have said before, I think he is one of the most dangerous men in America. On this issue of Trump’s racist immigration and deportation policy, he is not only complicit, he is a co-conspirator."