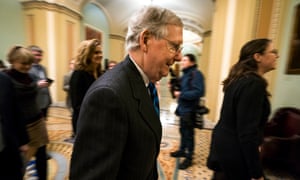 “I don’t believe he made any commitment whatsoever,” Kamala Harris, a senator from California who opposed the bill, said after the Senate advanced the measure. “And I think it would be foolhardy to believe that he made a commitment.”

Democrats went into the weekend confident that voters were on their side. Public polling indicated that Republicans, who control both chambers of Congress and the White House, would be held responsible."