It Started as a Tax Cut. Now It Could Change American Life. - The New York Times 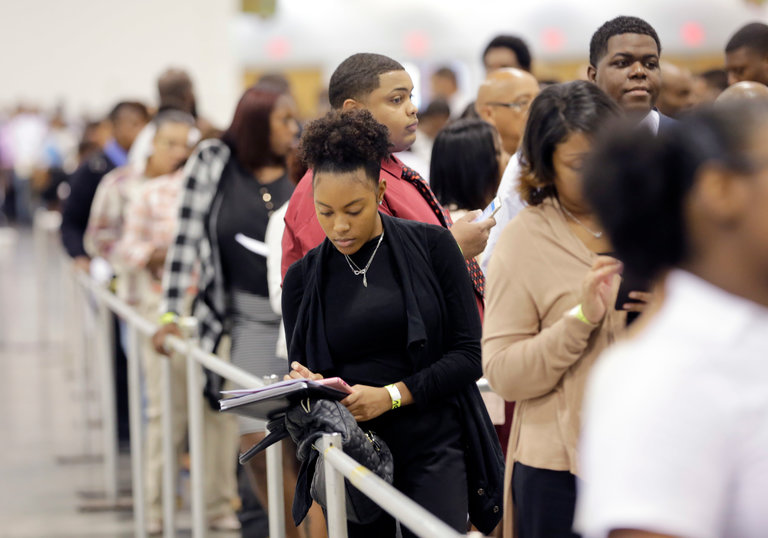 "A job fair in Atlanta last year. While Republicans promote their tax plan as a way to encourage job growth and economic expansion, its constraints on state and local taxation could restrict spending on health care, education, transportation and social services.

The tax plan has been marketed by President Trump and Republican leaders as a straightforward if enormous rebate for the masses, a $1.5 trillion package of cuts to spur hiring and economic growth. But as the bill has been rushed through Congress with scant debate, its far broader ramifications have come into focus, revealing a catchall legislative creation that could reshape major areas of American life, from education to health care.

Some of this re-engineering is straight out of the traditional Republican playbook. Corporate taxes, along with those on wealthy Americans, would be slashed on the presumption that when people in penthouses get relief, the benefits flow down to basement tenements.

Some measures are barely connected to the realm of taxation, such as the lifting of a 1954 ban on political activism by churches and the conferring of a new legal right for fetuses in the House bill — both on the wish list of the evangelical right.

With a potentially far-reaching dimension, elements in both the House and Senate bills could constrain the ability of states and local governments to levy their own taxes, pressuring them to limit spending on health care, education, public transportation and social services. In their longstanding battle to shrink government, Republicans have found in the tax bill a vehicle to broaden the fight beyond Washington.

The result is a behemoth piece of legislation that could widen American economic inequality while diminishing the power of local communities to marshal relief for vulnerable people — especially in high-tax states like California and New York, which, not coincidentally, tend to vote Democratic.

All of this is taking shape at such extraordinary velocity, absent the usual analyses and hearings, that even the most savvy Washington lobbyist cannot be fully certain of the implications.

Mr. Trump and the Republican leadership in Congress — stymied in their efforts to repeal Obamacare, and short of legislative achievements — have signaled absolute resolve to get a tax bill passed by the end of the year. As the sense has taken hold that Washington is now a trading floor where any deal is worth entertaining so long as it brings votes, interest groups have fixed on the tax bill as a unique opportunity to further their agendas.

“There’s a Christmas-tree aspect to the bill,” said C. Eugene Steuerle, a Treasury official during the Reagan administration and now a senior fellow at the Urban Institute. As an example, he cited the provisions in the House bill designed to appeal to the religious right..."

It Started as a Tax Cut. Now It Could Change American Life. - The New York Times
Posted by John H Armwood II at 8:45 AM