A G.O.P. Tragedy in Four Acts - The New York Times 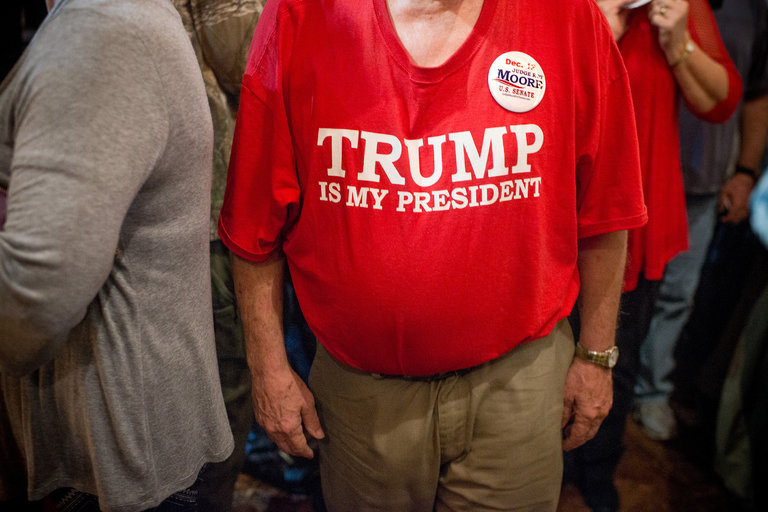 "With Roy Moore’s humiliating loss in the Alabama Senate race, the Trumpified Republican Party finds itself both defeated and dishonored, with no sign that it has yet hit bottom.

At every stage of the run-up to this special election, Republicans could have resisted, pushed back, or drawn lines, but their failure to do so lead them inexorably to this moment: the defeat of an unreconstructed bigot and ignorant crank who had the full-throated backing of the president they have embraced and empowered.

It may be worthwhile charting the party’s descent to this moment.

Think of it as a drama in four acts.

In Act I, the curtain opens to reveal a gaudy golden escalator, and as Donald Trump descends to announce his candidacy for president, the scene has the feel of a French farce. But the humor is tinged with menace, as his lies and insults pile up, targeting women, the disabled and minorities. As the curtain closes, it is unclear whether Republicans will bring themselves to embrace the erratic usurper. (Exit Jeb! stage right.)

The mood is more somber in Act II, as Republicans ponder their choice. A solitary Hamlet-like Paul Ryan paces the stage in a torn doublet and laments the evil days that have fallen on his party; he is accompanied by a Joker (who looks a lot like Lindsey Graham) who tells him that Donald Trump is a “kook,” someone who is “not fit to run the country.” But after several long monologues, in which he rationalizes that “there is nothing either good or bad, but thinking makes it so,” the young Mr. Ryan decides that the election is a binary choice and he and other Republicans must go along. He wavers after Mr. Trump engages in what he calls a “textbook definition” of racism and is caught on tape bragging about sexually assaulting women. Other women come forward, but they are largely ignored. Republicans make the choice to stick with him and to everyone’s surprise, Donald Trump wins. (Exit Mr. Ryan and Joker stage left.)

Act III opens to a scene shortly after the inauguration. One after another, Republican leaders bow the knee to the newly enthroned Orange God King, who is surrounded by a motley court of misfits, sycophants and brigands. Even as Mr. Trump’s behavior becomes increasingly outrageous and often unhinged, the party’s grandees appease and flatter him. Courtiers, who come and go, repeatedly reassure him that he is winning. After all, he is giving them what they want: judges, tax cuts, deregulation and an end to Obamacare mandates. Enter Paul Ryan, who is better dressed and a much more cheerful character in this act. He is asked: What choice would Republicans now make?

“We already made that choice,” he said. “We’re with Trump.”

And this is the New Normal for Republicans: the surrender of the party now seems complete. When the president retweets racist videos from a British fascist group, Republican leaders simply ignore it. They have grown accustomed to the politics of rationalization and the moral compromises it demands. So, as President Trump’s lies become more flagrant, they shrug. His conflicts of interest generate little attention, his tweet-rages hardly a blink. Even as the special prosecutor’s noose appears to close around the president’s inner circle, party leaders mimic Mr. Trump’s denunciations of the investigation. Despite toxic polling, Republicans have fallen into line behind his tax plan, even though it threatens to explode the deficit. There are dissenting voices, who are quickly hustled offstage, but they leave behind haunting warnings.

By the end of Act III, though, it is increasingly clear that this drama is less Hamlet and more Faust. It has only begun to dawn on the protagonists that in a Faustian bargain, you often get your heart’s delight, only to find out that the price was far more than you expected. (Alarms and excursions offstage.)

Act IV opens with a solitary, dark figure, a sort of infernal Falstaff (Steve Bannon), who, despite his banishment from the White House, remains an avatar of the forces that have been unleashed by Donald Trump’s presidency. Now Mr. Bannon presents the Republican Party with its future: Roy Moore.

But at Mr. Bannon’s urging, Mr. Trump embraces Mr. Moore and the Republican National Committee obediently follows suit. The women who have accused Mr. Moore of harassment, sexual assault and molestation are either disbelieved as “fake news,” or discounted because it was more important to defeat the Democrat than to take the issue of sexual abuse seriously. For many Republicans, this is a reprise of the choice they made a year ago, when they decided to overlook Donald Trump’s own conduct and character. But this time the result is a stunning electoral defeat for Mr. Trump in one of the reddest states in the country and a diminished majority for Republicans in the Senate, putting their entire agenda at risk.

There were voices of resistance. Paul Ryan and other Republican leaders tried to distance themselves from Mr. Moore. The former Republican presidential nominee Mitt Romney declared: “Roy Moore in the U.S. Senate would be a stain on the G.O.P. and on the nation. Leigh Corfman and other victims are courageous heroes. No vote, no majority is worth losing our honor, our integrity.”

But in this act, the Republican Party learns the full weight of the choices it has made, and their moral and political consequences. There was a certain inevitability to all of this. Step by step, Republicans embraced a politics that was post-truth and post-ethics. Now, in defeat, the party — or at least its leadership — is officially post-shame.

Some will argue that Republicans actually a dodged a bullet in Alabama, because they will not have to deal with the nightmare of a Senator Moore. But Republicans now head into a fearsome storm of outrage, tightly lashed to both President Trump and memories of Roy Moore’s horrific candidacy.

Throughout this final act, the party’s leaders will desperately try to pretend that this is not a tragedy and that they were not the ones who brought this upon themselves. Some of them will know better, but I suspect that in the final scene they will be left with the question “What have we done?”