[Roundtable] Does Trump's destiny clash with Korea's? It does 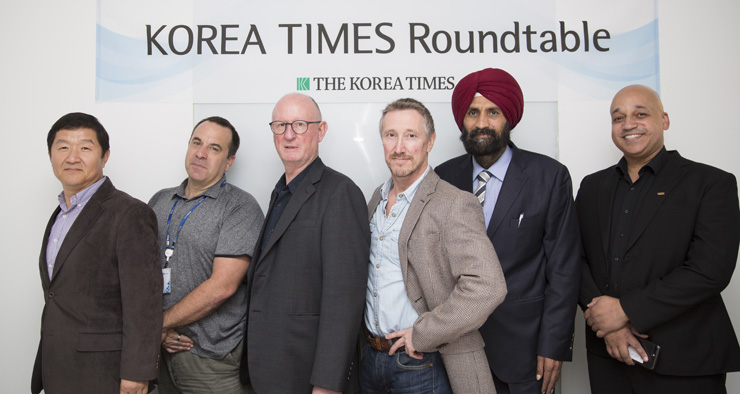 A Korean  (ROK) view of Trump's bombastic, emolument seeking speech to the General Assembly of the Republic of Korea.

"U.S. President Donald Trump is visiting South Korea. At the top of his agenda is North Korea's nuclear brinkmanship ― developing intercontinental ballistic missiles that can deliver nuclear bombs to U.S. cities. Already, the South has been living as a hostage by the North's threat of conventional weapons. At the roundtable, journalists and experts talked about what new dynamism Trump will bring to the Korean Peninsula but expectations for any immediate solution were not high.

This Schumpeterian work is composed of domestic and international parts ― although the results are closely intertwined.

The first is manifested in the "Drain the swamp" or "deconstruction of the administrative state."

It boils down to unraveling what has been done. One instance is killing the Trans-Pacific Partnership (TPP), the Asia-Pacific trade pact that was envisioned to stop China's rise. It also is linked to his effort to dismantle the Korea-U.S. free trade agreement, the North American Free Trade Agreement, and others.

Reviewing old traditional nation-to-nation relationships such as the ROK-U.S. alliance is part of it as well.

What appears to be Trump's destruction-for-destruction's sake effort to disable the Affordable Care Act or conduct tax reform allegedly in favor of the wealthy are also in.

The Trumpian act sometimes looks like undoing what his predecessor, Barack Obama had done. Appearances are deceiving. What Trump is doing is incomparable to ABC ― the mentality of anything but Clinton by his Republican successor George W. Bush.

Trump sounds and acts as if he doesn't have any clue about what he is trying to do. Often he is portrayed to be a madman not in theory as enacted by President Nixon but in actuality.

He argues that it is fake news generated by mainstream media that hate him. He is deep in the Russian scandal ― allegations of collaborating with Russian dictator Putin to beat Hillary Clinton in the 2016 U.S. election ― or turning the White House into his family business ― his daughter, son-in-law and sons being all involved one way or another.

To sum up the critics' claims, he is unpredictable, a crook, unworthy of the office he occupies.

But even if all characterizations appear true, his presidency was born in a historic context. That is his trump card. The fact that he lost in the popular vote didn't disqualify his presidency.

That context was that people felt the status quo was unbearable and should be discontinued.

The top 1 percent flourishes on the servitude of the remaining 99 percent.

It happened during Brexit, the British popular vote to exit the European Union.

It has taken place to a different degree in the Netherlands, Germany and France. Trump has a mandate given by the disgruntled American voters and one to represent the globally disfranchised.

That forms the basis for his power however it may have been enfeebled.

Now, North Korea is one of the status quo issues.

Pyongyang has sucked its neighbors' blood for the past 70 years after the division of the Korean Peninsula ― the South under U.S. rule and the North under the Soviets.

All of the preceding U.S. presidents have avoided or failed to resolve the North Korean problem.

His immediate predecessor Obama cleverly passed the challenge of tackling it and Trump ended up with the fateful musical chair. He declared that this nettlesome issue was put "front and center."

Some may say that Trump is trying to apply force to the North in order to marshal domestic support behind him and dodge impeachment.

It would be more appropriate to call it his destiny because the consequences will surely shatter the status quo, however it will be resolved.

Trump is an agent of change but as with any case of constructive destruction whether he will succeed is a tossup."

[Roundtable] Does Trump's destiny clash with Korea's? It does
Posted by John H Armwood II at 10:14 AM