“Kelly Has Clipped his Wings”: Jared Kushner’s Horizons Are Collapsing within the West Wing | Vanity Fair 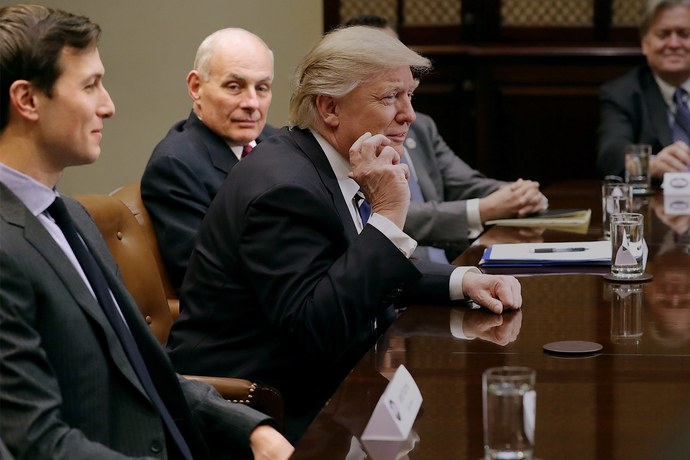 "It’s perhaps hard to remember now, but it wasn’t long ago when Trump handed Kushner a comically broad portfolio that included plans to reinvent government, reform the V.A., end the opioid epidemic, run point on China, and solve Middle East peace. But since his appointment, according to sources, Kelly has tried to shrink Kushner’s responsibilities to focus primarily on the Israeli-Palestinian conflict. And even that brief appears to be creating tensions between Kushner and Kelly. According to two people close to the White House, Kelly was said to be displeased with the result of Kushner’s trip to Saudi Arabia last month because it took place just days before 32-year-old Saudi Crown Prince Mohammad bin Salman arrested 11 Saudi royals, including billionaire Prince Alwaleed bin Talal. The Washington Post reported that Kushner and M.B.S., as the prince is known, stayed up till nearly 4 a.m. ‘planning strategy,’ which left Kelly to deal with the impression that the administration had advance knowledge of the purge and even helped orchestrate it, sources told me. (Asked about this, Sarah Huckabee Sanders responded, in part: ‘Chief Kelly and Jared had a good laugh about this inquiry as nothing in it is true.’)

Where this all leaves Kushner in Trump’s ever-changing orbit is a topic that’s being discussed by Republicans close to the White House. During Kelly’s review of West Wing operations over the summer, the chief of staff sought to downsize Kushner’s portfolio, two sources said. In the early days of the administration, sometimes with the help of a small cadre of Ivy League whiz kids who staff his Office of American Innovation, Kushner dreamed up scores of business ‘councils’ that would advise the White House. ‘The councils are gone,’ one West Wing official told me. With some of their purview being whittled away, ‘they seem lost,’ the official added."

(Via.).  “Kelly Has Clipped his Wings”: Jared Kushner’s Horizons Are Collapsing within the West Wing | Vanity Fair: