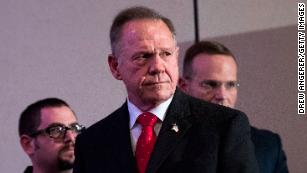 "Walter Shaub, who served as ethics director under the Obama administration, said Conway likely violated the Hatch Act, which prohibits White House officials from advocating for or against candidates, even in media interviews.

Speaking to Fox News Monday, Conway addressed the heated Alabama race and Moore's Democratic competitor, saying, "Doug Jones in Alabama, folks, don't be fooled. He will be a vote against tax cuts. He is weak on crime. Weak on borders. He is strong on raising your taxes. He is terrible for property owners."

Kellyanne Conway on Roy Moore: 'We want the votes' for tax bill

Conway added: "I just want everybody to know, Doug Jones, nobody ever says his name, and pretends he is some kind of conservative Democrat in Alabama. And he's not."

Shaub tweeted following news of the interview Tuesday, "I found the video. She's standing In front of the White House. It seems pretty clear she was appearing in her official capacity when she advocated against a candidate. This is at least as clear a violation of 5 U.S.C. § 7323(a)(1) as OSC identified with regard to Castro."