Fighting Gay Rights and Abortion With the First Amendment - The New York Times - The right's strategy to limit LBGT rights.

""Only after an outcry over such secrecy — and the anti-gay rights positions of its sponsor — did a transcript of Mr. Sessions’s remarks emerge on a conservative website. “Many Americans have felt that their freedom to practice their faith has been under attack,” he told the gathering in Orange County, Calif. “The challenges our nation faces today concerning our historic First Amendment right to the ‘free exercise’ of our faith have become acute.”

Mr. Sessions’s focus was not an accident. The First Amendment has become the most powerful weapon of social conservatives fighting to limit the separation of church and state and to roll back laws on same-sex marriage and abortion rights.

Few groups have done more to advance this body of legal thinking than the Alliance Defending Freedom, which has more than 3,000 lawyers working on behalf of its causes around the world and brought in $51.5 million in revenue for the 2015-16 tax year, more than the American Civil Liberties Union.

Among the alliance’s successes has been bringing cases involving relatively minor disputes to the Supreme Court — a law limiting the size of church signs, a church seeking funding for a playground — and winning rulings that establish major constitutional precedents.

But it hopes to carve out an even wider sphere of protected religious expression this term when the justices are to hear two more of its cases, one a challenge to a California law that requires “crisis pregnancy centers,” which are run by abortion opponents, to provide women with information on how to obtain an abortion, and another in which it represents a Colorado baker who refused to make a cake for a gay couple’s wedding.

While the abortion case is the latest legal volley in a generation-long battle by social conservatives to limit the effect of Roe v. Wade, the Colorado baker’s case, which the court will hear next month, will test whether groups like the alliance can persuade the court to similarly blunt the sweep of Obergefell v. Hodges, the ruling that enshrined same-sex marriage into law, as well as the anti-discrimination laws protecting gay men and lesbians.

If there is a battle somewhere to restrict protections for gay men, lesbians or transgender people, chances are the alliance is there fighting it. The alliance has defended the owners of a wedding chapel in Coeur d’Alene, Idaho, who did not want to perform same-sex ceremonies. It has tried to stop a Charlotte, N.C., law that gave transgender people the right to use the bathroom of their choice. It backed the failed attempt by the Arizona legislature in 2014 to allow businesses to cite religious freedom in turning away same-sex couples.

But civil liberties groups and gay rights advocates say that Alliance Defending Freedom’s arguments about religious liberty and free expression mask another motivation: a deep-seated belief that gay people are immoral and that no one should be forced to recognize them as ordinary members of society.

“They are a very powerful part of this broader movement, which is trying to bring a very particular biblical worldview into dominance at all levels of government and society,” said Peter Montgomery, a senior fellow at People for the American Way, a liberal advocacy group. 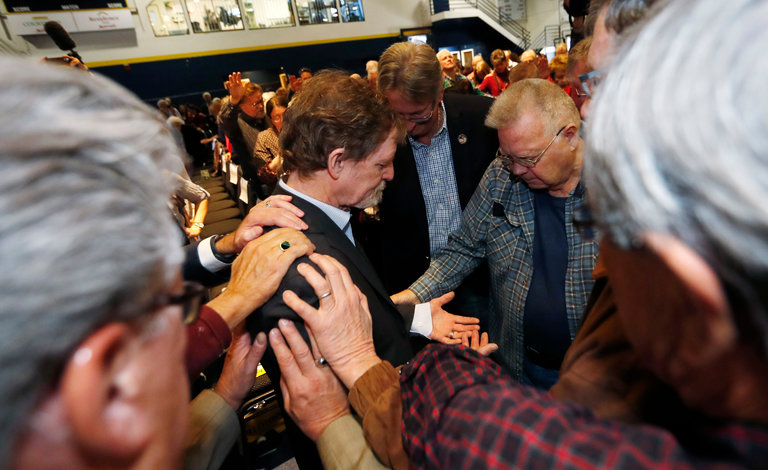 “They’ve got some very big, very clear goals,” said Mr. Montgomery, who has studied Alliance Defending Freedom since the group’s founding in 1994.

One of those goals was to defend laws that criminalized gay and lesbian sexual conduct.

In a brief the alliance filed urging the Supreme Court not to overturn a Texas law that made homosexual activity illegal, its lawyers described gay men as diseased and as public health risks. The court decided 6 to 3 that the law was unconstitutional.

The United States is not the only place the group has been active. Before Belize’s highest court struck down a law last year that banned “carnal intercourse against the order of nature,” the group sent activists there to work with local lawyers who were trying to keep the prohibition in place. In India, an Alliance Defending Freedom-affiliated lawyer was part of the legal team that has defended a similar law in the country’s Supreme Court. That law remains in place, though the Indian court recently signaled that it may revisit the issue.

And when Russia approved a law in 2013 that imposed a fine for what it called propagandizing “nontraditional” sexual relationships among minors — a move that led for calls to boycott the 2014 Olympics there — Alliance Defending Freedom produced a nine-page memo in support of the law, saying its aim was to safeguard “the psychological or physical well-being of minors.”

Mr. Tedesco said the group had never supported the criminalization of homosexual activity. In Belize and India, he noted, the laws the group supported applied to heterosexual sodomy as well. He described the alliance’s involvement in both countries as “a small group of attorneys” who wanted “to resist the foreign activists that were trying to challenge their public health law.”

Asked if he and other alliance lawyers believed gay men and lesbians were immoral, Mr. Tedesco said, “I’m not going to get into what the Bible says or teaches about homosexuality.”

Fighting Gay Rights and Abortion With the First Amendment - The New York Times
Posted by John H Armwood II at 11:12 AM