The Menace of Trumpism - The New York Times 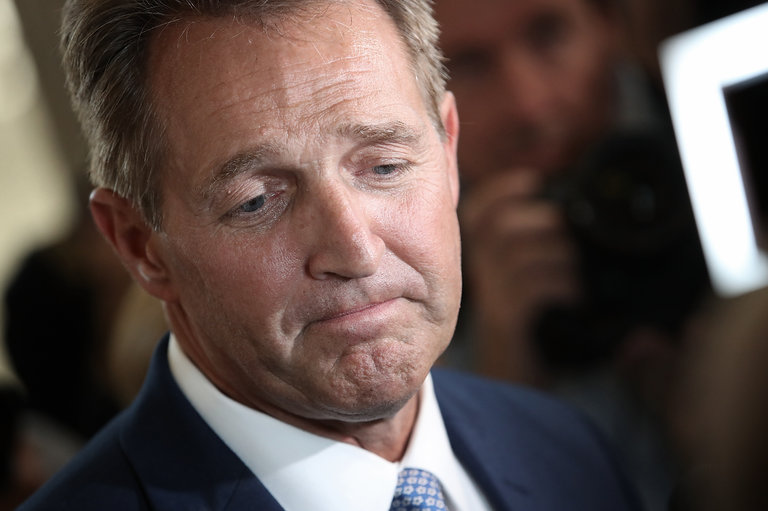 "Senator Jeff Flake gave a powerful, even poetic speech on Tuesday rebuking Donald Trump and the menace of Trumpism consuming the damaged Republican Party. But he undercut the power of the speech by coupling it with the announcement of his impending retirement from the Senate.

Anyone who has ever left a job knows that what you say during your exit interview — no matter how compelling and profound — is of limited utility.

More important, this was the kind of speech where people focus more on the excerpt-worthy flourishes than on the disturbing minutiae.

Yes, it was historic to have a sitting senator attack the sitting president of his own party from the Senate floor.

But Flake wasn’t only excoriating Trump, he was also excoriating his fellow elected officials, particularly Republicans, and the Republican Party, which finds itself caught in a perpetual rage spiral, in which no one but extremists are pure enough. The circle of inclusion is being drawn smaller and tighter around an electorally deadly singularity: White people who espouse Christianity, accept patriarchy and misogyny, and turn a blind eye to (or sometimes openly encourage) white supremacy.

Look at all the times Flake chided the “we” in that speech.

As he said at one point, putting the blame squarely on his Senate colleagues:

“And what do we, as United States senators, have to say about it? The principles that underlie our politics, the values of our founding, are too vital to our identity and to our survival to allow them to be compromised by the requirements of politics because politics can make us silent when we should speak and silence can equal complicity. I have children and grandchildren to answer to.”

“And so, Mr. President, I will not be complicit or silent. I’ve decided that I would be better able to represent the people of Arizona and to better serve my country and my conscience by freeing myself of the political consideration that consumed far too much bandwidth and would cause me to compromise far too many principles.”

He followed by pointing out that “it is clear at this moment that a traditional conservative” has a “narrower and narrower path to nomination in the Republican Party,” which has “given in or given up on the core principles in favor of a more viscerally satisfying anger and resentment.”

First, it is true that Republicans in both the House and Senate have chosen career over country and have subordinated principle to party and power. They see in Trump a chance for a transactional relationship, each getting a bit of what they want, even though they know full well that Trump is unstable and unfit for the presidency.

Indeed, I’m growing increasingly angry with Republican lawmakers expressing grave concerns about Trump in private and on background, but biting their tongues in public.

It is no coincidence that the Republican legislators in Washington who have been most critical of Trump — Flake, Bob Corker and John McCain — are those who are definitely not seeking another term, or are unlikely to do so. Even George W. Bush criticized Trump (without saying his name), but he too has nothing to lose electorally.

Where are the real heroes, those with skin in the game and planning to keep it there? Where is the true courage? Well, not in the Republican Party. Political heroism and displays of principled valor have been banished from its ranks. In their stead stand the craven and the corrupt.

It is understandable for Trump to assume Republican senators adore him if, in public, they shower him with adoration. Three times, Trump has referred to getting a standing ovation at a lunch he had Tuesday with Republican senators.

When you bend to lick a boot you relinquish the posture required to stand and tell the truth.

But what is even more disturbing is the slide of the Republican Party toward a presiding sentiment of the “anger and resentment” Flake described. Make no mistake, Flake is no moderate simply because he opposes Trump as a person. He rarely opposes him legislatively.

What has happened is that the ground keeps lurching more rightward beneath Flake’s feet, toward fundamentalism and fanaticism. Indeed, Flake was a Tea Party darling who got scalped by Steve Bannon-ism.

None of it is disqualifying. To the contrary, it is supremely satisfying. the Moral Majority has become the iniquitous minority.

This Republican Party is the party of Trump and Bannon, not Flake and Corker.

As Corker correctly said of Trump on CNN:

“He purposely is breaking down relationships we have around the world that have been useful to our nation, but I think at the end of the day, when his term is over, I think the debasing of our nation, the constant non-truth-telling, the name calling … the debasement of our nation will be what he will be remembered most for, and that’s regretful.”

The Menace of Trumpism - The New York Times
Posted by John H Armwood II at 12:13 PM