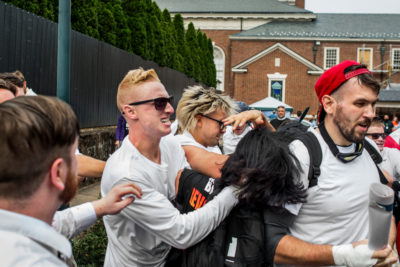 "It was about 10 a.m. on Aug. 12 when the melee erupted just north of Emancipation Park in Charlottesville, Virginia.

About two dozen white supremacists — many equipped with helmets and wooden shields — were battling with a handful of counter-protesters, most of them African American. One white man dove into the violence with particular zeal. Using his fists and feet, the man attacked one person after another.

The street fighter was in Virginia on that August morning for the “Unite the Right” rally, the largest public gathering of white supremacists in a generation, a chaotic and bloody event that would culminate, a few hours later, in the killing of 32-year-old Heather Heyer, who was there to protest the racist rally.

The violence in Charlottesville became national news. President Donald Trump’s response to it — he asserted there were “some very fine people on both sides” of the events that day — set off a wave of condemnations, from his allies as well as his critics.

But for many Americans, conservatives as well as liberals, there was shock and confusion at the sight of bands of white men bearing torches, chanting racist slogans and embracing the heroes of the Confederacy: Who were they? What are their numbers and aims?

There is, of course, no single answer. Some who were there that weekend in Charlottesville are hardened racists involved with long-running organizations like the League of the South. Many are fresh converts to white supremacist organizing, young people attracted to nativist and anti-Muslim ideas circulated on social media by leaders of the so-called alt-right, the newest branch of the white power movement. Some are paranoid characters thrilled to traffic in the symbols and coded language of vast global conspiracy theories. Others are sophisticated provocateurs who see the current political moment as a chance to push a “white agenda,” with angry positions on immigration, diversity and economic isolationism.

ProPublica spent weeks examining one distinctive group at the center of the violence in Charlottesville: an organization called the Rise Above Movement, one of whose members was the white man dispensing beatings near Emancipation Park Aug. 12.

The group, based in Southern California, claims more than 50 members and a singular purpose: physically attacking its ideological foes. RAM’s members spend weekends training in boxing and other martial arts, and they have boasted publicly of their violence during protests in Huntington Beach, San Bernardino and Berkeley. Many of the altercations have been captured on video, and its members are not hard to spot.

Indeed, ProPublica has identified the group’s core members and interviewed one of its leaders at length. The man in the Charlottesville attacks — filmed by a documentary crew working with ProPublica — is 24-year-old Ben Daley, who runs a Southern California tree-trimming business.

Many of the organization’s core members, including Daley, have serious criminal histories, according to interviews and a review of court records. Before joining RAM, several members spent time in jail or state prison on serious felony charges including assault, robbery, and gun and knife offenses. Daley did seven days in jail for carrying a concealed snub-nosed revolver. Another RAM member served a prison term for stabbing a Latino man five times in a 2009 gang assault.