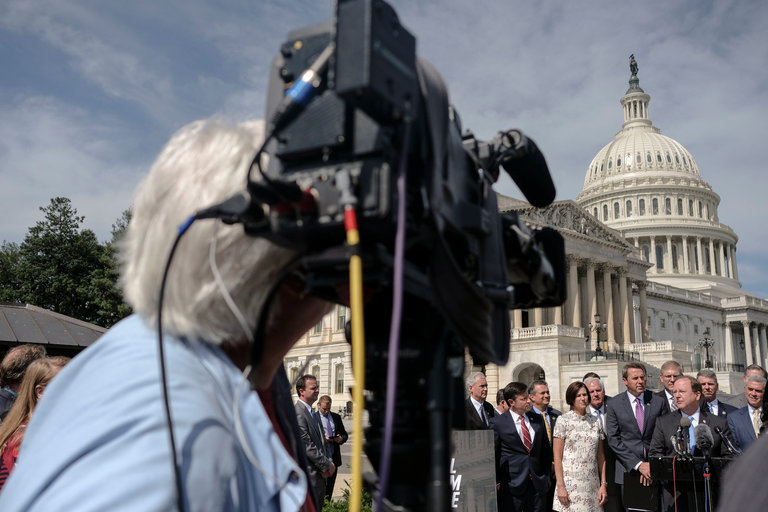 "WASHINGTON — In 2001, when surging budget surpluses fueled hopes of extinguishing the national debt, a pitched battle broke out over President George W. Bush’s proposed $1.6 trillion tax cut. Never mind that the tax cut’s 10-year tab was supposed to leave behind more than $3 trillion in surpluses — Democrats and some Republicans said that the tax cut was just too large.

Fast forward to President Trump’s Washington, where the budget deficit for this fiscal year is projected to near $700 billion and the federal debt has topped $20 trillion.

A new tax cut is emerging to rival those of the Bush years, and the deficit hawks have hardly peeped.

“It’s a great talking point when you have an administration that’s Democrat-led,” said Representative Mark Walker, Republican of North Carolina and the chairman of the Republican Study Committee, a group of about 150 conservative House members. “It’s a little different now that Republicans have both houses and the administration.”

For years, Republican lawmakers lamented the soaring national debt, pressing for spending cuts and clinging to the mantle of fiscal responsibility. But last week, Senate Republicans hammered out a deal to allow for as much as $1.5 trillion in tax cuts, betting that supercharged growth will make up for lost revenue, a potentially dubious prospect. The tax plan outlined Wednesday by the White House and Republican leaders in the House and Senate could cost more than $2 trillion over the next decade, according to a preliminary estimate by the Committee for a Responsible Federal Budget, a nonpartisan advocacy group.

This month, the majority of Republicans in the House and the Senate voted to raise the debt limit without doing anything to rein in spending.

Republican lawmakers are pushing to increase military spending by tens of billions of dollars, topping even Mr. Trump’s request for a beefed-up military. Democrats are sharing in the fiscal intemperance, lining up behind a “Medicare for all” proposal despite having no definitive plan for how to pay for universal, government-provided health coverage."