Washington (CNN)In the last 24 hours, President Donald Trump has criticized NFL players who refuse to stand for the national anthem and NBA superstar Steph Curry for expressing ambivalence about whether or not to attend the traditional White House celebration for champions in professional sports. On Friday night in Alabama, Trump condemned football players who either sit or protest in some other way during the national anthem -- and chastised the NFL owners for not coming down harder on them. "Wouldn't you love to see one of these NFL owners, when somebody disrespects our flag, to say, 'Get that son of a bitch off the field right now. He is fired. He's fired!" Trump said to considerable applause from the overwhelmingly white crowd. "Total disrespect of our heritage, a total disrespect of everything that we stand for. Everything that we stand for." Then, on Saturday morning, Trump tweeted this about Curry: "Going to the White House is considered a great honor for a championship team. Stephen Curry is hesitating, therefore invitation is withdrawn!" 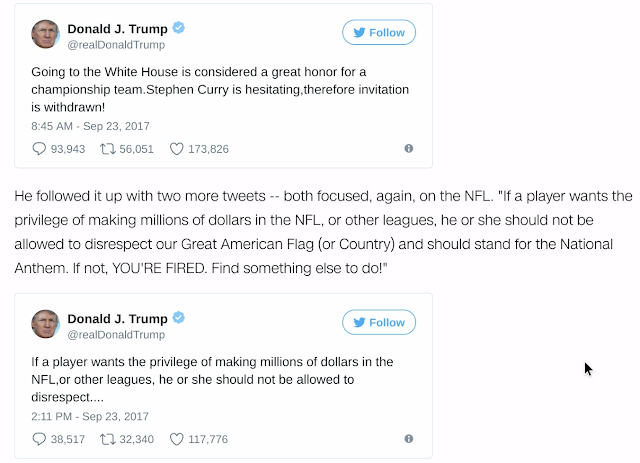