Is Trump a White Supremacist? - The New York Times 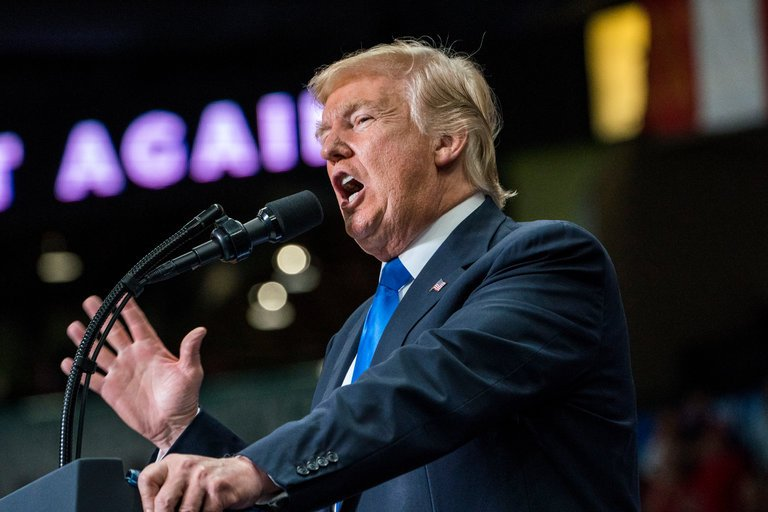 That was only one in a string a tweets on Sept. 11 by ESPN host Jemele Hill in which Hill goes on to say that Trump is “the most ignorant, offensive president of my lifetime,” that he hired and courted white supremacists, that “His rise is a direct result of white supremacy,” that “if he were not white, he never would have been elected.” Hill insinuates that the Republican Party “has done nothing but endorse/promote white supremacy.”
These tweets caused quite a stir. The White House perpetual lie-generator and press secretary, Sarah Huckabee Sanders, said that it was a fireable offense for ESPN. Sanders’s statement, of course, was not without its own controversy. As TheWrap reported:
“The Democratic Coalition, an anti-Trump Super PAC, has filed an ethics complaint against White House Press Secretary Sarah Huckabee Sanders with the Office of Government Ethics for her comments calling on ESPN host Jemele Hill to be fired.”
TheWrap continued:
“The group claims federal law prohibits government employees from influencing ‘a private entity’s employment … solely on the basis of partisan political affiliation.’”

Then on Friday, Trump himself weighed in, because obviously there are no more pressing matters that need his attention, oh like, say, North Korea continuing to launch missiles over Japan, for one.
Trump tweeted:
“ESPN is paying a really big price for its politics (and bad programming). People are dumping it in RECORD numbers. Apologize for untruth!”
This tweet, for me, changed the conversation. It moved the discussion from propriety and in-house rules of conduct by a brand, to a question of veracity. Was what Hill said untrue, as Trump’s tweet suggests, or is Trump in fact a white supremacist who has surrounded himself with white supremacists and whose party courted white supremacists?
Two of those points can be quickly put to rest. First, there is no question that Trump has hired someone who was at least a booster of white supremacists: Steve Bannon. In a sinister act of double signaling, Bannon was hired as the Trump campaign’s chief executive on the same day that Trump started his fake outreach to black voters in Milwaukee.

Also, while the Republican Party clearly stands for more than white supremacy and the promotion of that intellectually fallacious concept, the party has often turned a blind eye to the racists in its midst and done far too little to extricate them.
But then the question remains: Is Trump himself a white supremacist?
This question is almost unanswerable in the absolute, but there is mounting circumstantial evidence pointing in a most disquieting direction.
First, we must submit that Trump is not particularly discerning in the administration of his insults. As The New York Times’s Upshot pointed out in July, “Trump is on track to insult 650 people, places and things on Twitter by the end of his first term.” He is often reflexive with his derisions, attacking those who criticize or condemn him. Many of Trump’s lackeys laud his instinct to counterpunch. When Trump attacked MSNBC host Mika Brzezinski, Huckabee Sanders explained, “When the president gets hit, he’s going to hit back harder.”
They paint it as strength, although it is clearly weakness. It is a masking of fragility with aggression. And the traditionally marginalized — women, racial, religious and ethnic minorities — are treated to a particularly personal strain of Trump’s venom. In Trump’s eyes, Barack Obama wasn’t simply a bad president, he was illegitimate and inferior, a person who couldn’t possibly be as talented as the world thought he was. He questioned whether Obama had actually attended his prestigious colleges and insisted that Obama’s memoir was too well-written for him to have written it, that it must have been written by a white man.
Is Trump patriarchal and misogynistic? Definitely. But what of white supremacy?

It is clear that Trump is a hero among white supremacists: He panders to them, he is slow to condemn them and when that condemnation manifests, it is often forced and tepid. Trump never seems to be worried about offending anyone except Vladimir Putin and white supremacists.
What does that say about him? How can you take comfort among and make common cause with white supremacists and not assimilate to their sensibilities?
I say that it can’t be done. If you are not completely opposed to white supremacy, you are quietly supporting it. If you continue to draw equivalencies between white supremacists and the people who oppose them — as Trump did once again last week — you have crossed the racial Rubicon and moved beyond quiet support to vocal support. You have made an allegiance and dug a trench in the war of racial hostilities.
Hill may have pushed into the realm of hyperbole with a few of her statements — it was Twitter after all — but I judge the spirit of her assessment to be true.
Either Trump is himself a white supremacist or he is a fan and defender of white supremacists, and I quite honestly am unable to separate the two designations."

Is Trump a White Supremacist? - The New York Times: ""