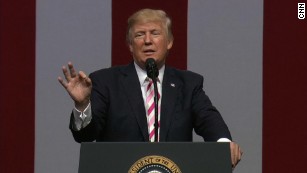 "Our intelligence community assessment did, I think, serve to cast doubt on the legitimacy of his victory in the election," Clapper said on CNN's "Erin Burnett Out Front."

Clapper said he disclosed the information to the President during a briefing on the assessment in January, and that particular aspect seemed to concern Trump the most."