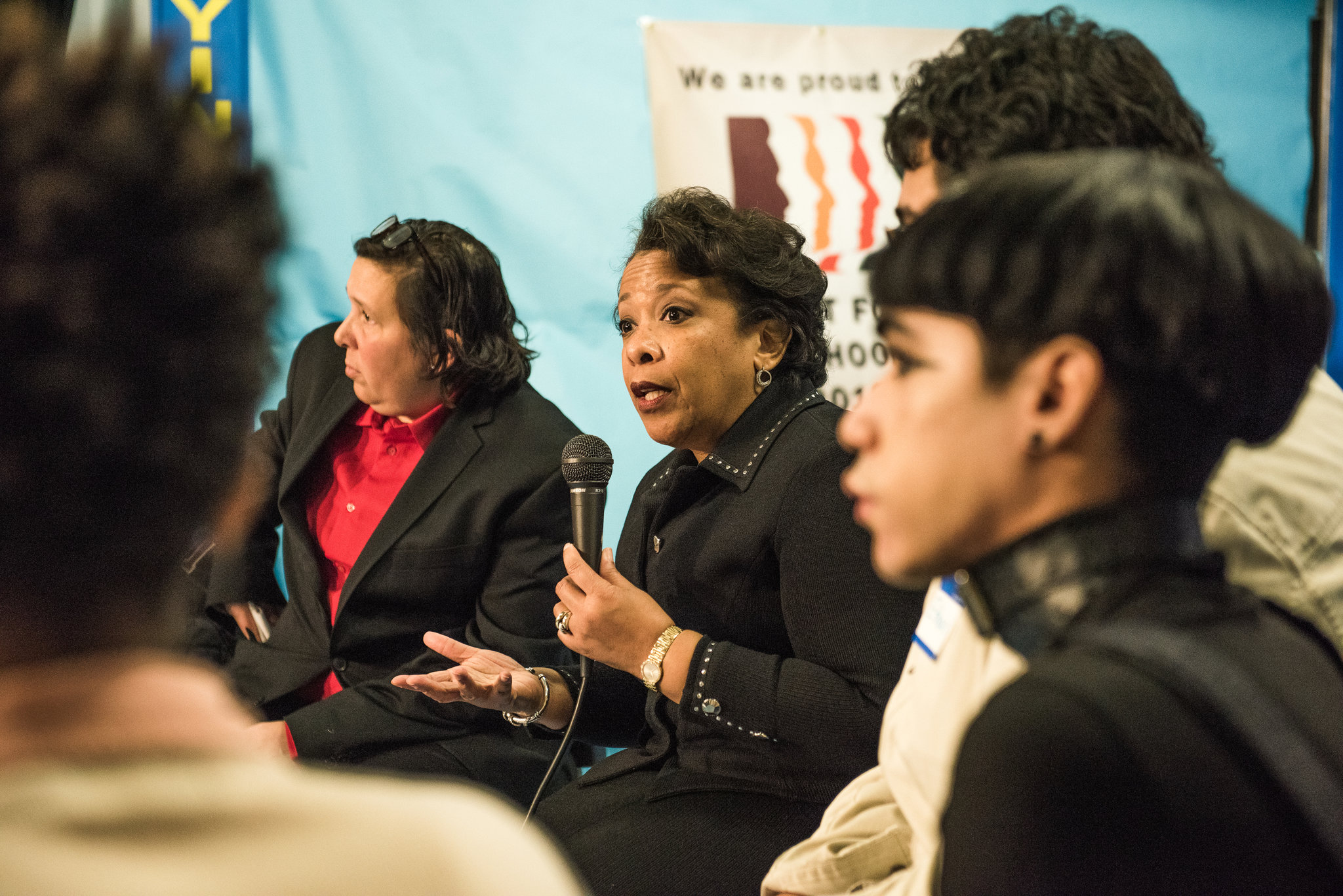 “There is nothing foreordained about our march toward a more just and peaceful future,” Ms. Lynch said Monday, speaking to an interfaith group at the All Dulles Area Muslim Society Center in northern Virginia. “Our centuries-long project of creating a more perfect union was not the product of fate or destiny. It was the result of countless individuals making the choice to stand up, to demand recognition, to refuse to rest until they knew that their children were inheriting a nation that was more tolerant, more inclusive and more equal.”

She delivered a gentler version of that message on Tuesday as she sat with students at New York City’s Harvey Milk High School, which serves mainly gay, lesbian, bisexual and transgender teenagers. She beamed as students described how they had blossomed at the school, which offers a refuge from bullying, scorn and self-doubt.

“You all are the ones who have the courage to walk with us,” Ms. Lynch told the students at the school in Manhattan. “Without people who are willing to stand up and say that they have an issue or a problem or something that has happened to them, we would not be able to move these issues forward.”

Left unsaid, but widely understood, is that the Justice Department under Mr. Trump is likely to abandon groundbreaking civil rights litigation carried out during the Obama administration. Transgender Americans will be especially vulnerable. Both Ms. Lynch and Eric Holder, her predecessor as attorney general, embraced interpretations of civil rights law to extend protections to people facing discrimination for their gender identity. In May, Ms. Lynch delivered an impassioned speech about transgender rights in explaining the Justice Department’s lawsuit to strike down a discriminatory state law in North Carolina. The department has also backed the legal claims of transgender students fighting for the right to use the restroom that matches their gender identity.

“Those cases are still pending, and we don’t know what’s going to happen to them,” Ms. Lynch told me in an interview. As she prepares to clear out her office — which could soon be occupied by Senator Jeff Sessions, a man who 30 years ago was deemed too racist to be confirmed as a federal judge — she is cognizant that other civil rights are under assault. Republican lawmakers around the country have spent the last several years creating new laws and tactics to suppress voting by racial minorities and young voters — many of which Mr. Obama’s Justice Department has fought with some success. During the interview, she appeared to acknowledge that the Justice Department may no longer be on the front lines of beating back this scourge.

It is sobering to hear a departing attorney general implicitly telling vulnerable Americans that the federal government may fail to protect their rights and that they will have to do this work themselves. But any other message would whitewash the painful truth."