Exhibition Review - John Lindsay’s Tumultuous Years as New York Mayor - NYTimes.com: "What on earth happened? We enter the fine new exhibition at the Museum of the City of New York and see that handsome patrician, boyishly grinning on posters and magazine covers: John V. Lindsay, Park Avenue-born son of privilege, graduate of Yale and Yale Law School and, in 1965, newly elected mayor of New York City. He is just out of his early 40s and is so charismatic, striding through the city streets with such casual authority, that he might have been a gift of the Fates to replace another boyish, privileged political leader, a president assassinated just two years before. 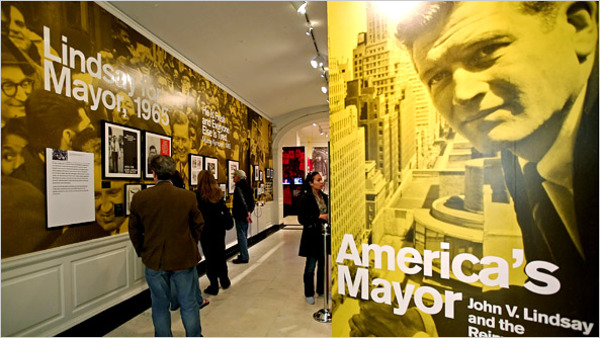 I had the pleasure of spending some time around John V. Lindsay during his second campaign for Mayor in 1969. He was a kind, outgoing person. I was only sixteen but he always took time to speak with me. I was working, first as a volunteer, then a staff person on the campaign. That campaign was my introduction to electoral politics. I worked with his political organization for the next four years. I have many fond memories of John Lindsay and his wife Mary.